Farmers' Attitudes Towards Treated Sludge (Biosolids) use in Agriculture: Evidence from Jordanian Badia 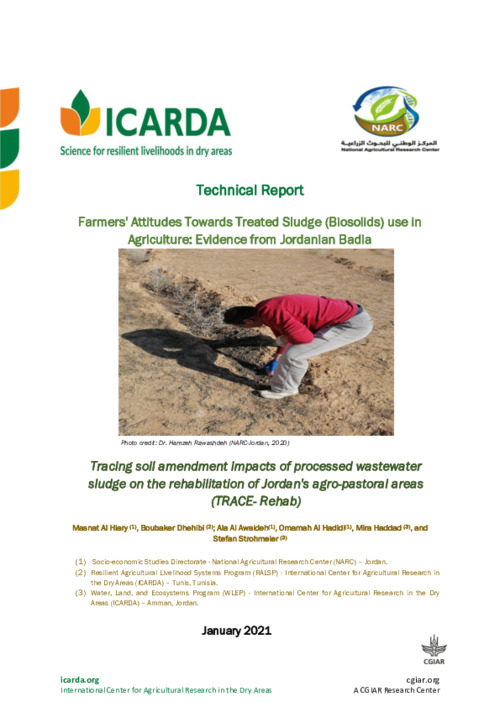 The application of treated sludge (biosolids) on agricultural land has been widely acknowledged, given the cost-effectiveness of this method and its easy use. When appropriately applied to agricultural land, sludge can replenish organic matter and nutrients in the soil. Although treated biosolid has been used in agriculture in many parts of the world, its acceptability varies with farmers' different cultures and beliefs. Literature review reveals that farmers' concerns on sludge use are primarily due to its anthropogenic origin, pollutants that it carries, and a general perception of treated biosolid being unsafe and risky. This research investigates farmers' perceptions of land application of treated sludge (biosolid) on their farm. This study targeted Al Majeddyeh farming community located in Jordanian Badia. Surveys were conducted with randomly selected 20 farmers in this village. Overall, farmers' perception of land application of treated biosolids is negative, and the majority of the farmers don't want to use treated biosolids for several reasons such as their trust in the suitability of the treated biosolid; concerns on the consumed product (transfer of disease); lack of knowledge on the biosolid properties and advantages and disadvantages of sludge use in agriculture. In terms of the most critical factors influencing farmers' fertilizer purchasing decision were: the safety of fertilizer, nutrient content, organic matter, water holding capacity, recommended by a trusted source, suggested volumes apply, price of the fertilizer, fertilizer application, and know of someone who used it. The survey also revealed that all respondents didn't use treated biosolids before. In terms of accepting manure mixed with biosolids, most of the respondents refused manure mixed with biosolids, and only 20% accepted this mixture. This study's findings are valuable for Jordanian decision-makers in their roles to promote the use of treated bio-solid sludge as fertilizers and soil conditioners. The Agriculture and Extension Services in the Agriculture Ministry should encourage farmers to use treated sludge (biosolid) in their community. Results suggest that land application of biosolid sludge can be accepted by more farmers if farmers are well trained for the safe and effective use of treated biosolid. Launching awareness programs about the benefits of treated biosolids and improving farmers' perceptions on its land application; raising public awareness by holding training workshops and conducting surveys about the efficient application of treated sludge (biosolid).