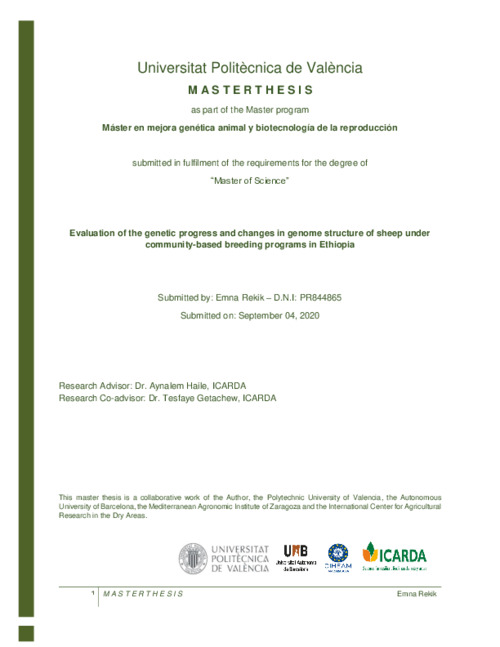 Emna Rekik. (4/9/2020). Evaluation of the genetic progress and changes in genome structure of sheep under community-based breeding programs in Ethiopia.

Several pilot community-based breeding programs (CBBPs) were established since 2009 for various sheep breeds in Ethiopia. In these CBBPs, the main selection trait identified through participatory approaches was six-month weight (SMWT). The purpose of this study was to contribute to an understanding of the results of CBBP practices for two breeds (Bonga and Menz) by addressing (i) Estimation of the correlation between phenotypic based selection and BLUP-EBV; (ii) Assessment of the effect of selection based on SMWT on other productive and reproductive traits; (iii) Quantification of genetic trend for growth and reproduction traits; and (iv) Assessing the genomic changes induced by CBBPs. Data on 10877 lamb records from Bonga and 16245 from Menz sheep breed were collected between 2009 and 2018. Performance data from the breeding programs were analyzed using Average Information Restricted Maximum Likelihood Method (AI-REML). To understand how selection on weight traits impacted the genomic structure, we assessed genomic diversity, population structure, and signatures of selection of improved-under-CBBP and non-improved Menz and Bonga sheep populations using high density 600K SNP genotyping. A total of 182 animals of the two breeds were sampled from participating and non-participating flocks in CBBPs. The correlation between the phenotype BV and the BLUP EBV correlation in both Menz and Bonga is high during all the years ranging from 0.77 to 0.92. For Menz, heritability estimates of 0.04, 0.18 and 0.39 were obtained for Birth Weight (BWT), Weaning weight (WWT) and (SMWT), respectively. For Bonga, the corresponding values were 0.17, 0.42 and 0.32. For Menz, genetic correlation estimates of 0.90, 0.53 and 0.88 were obtained between SMWT and WWT, SMWT and YWT and WWT and BWT, respectively. For Bonga, high to moderate genetic correlations of 0.97 and 0.42 were obtained between SMWT and WWT and litter size (LS) and SMWT, respectively. Over the years, there was a sustained genetic progress in SMWT for both breeds, being on average 0.12 ± 0.022 and 0.04 ± 0.003 kg/year for Bonga and Menz, respectively. Genetic progress in BWT was not observed in Bonga, but a significant increase occurred in Menz. For both breeds, WWT showed a significant increase reaching 0.09 ± 0.012 and 0.02 ± 0.018 kg/year for Bonga and Menz, respectively. Considering that there was no direct selection on WWT in the community flocks, the calculated increased weights were due to correlated responses. The genetic trend for LS over the years in Bonga was positive and significant (P < 0.01). In Menz, the observed heterozygosity HO and hxpected heterozygosity HE were 0.31 and 0.32, respectively while for Bonga, a lower similar value of 0.3 was calculated for HO and HE. The average pairwise population differentiation (FST) between the two breeds was 0.083%, ranging from 0.078% to 0.087%, indicating their low to moderate differentiation. The FST within the same breed but between improved-under-CBBP and non-improved was 0.007%. PCA and ADMIXTURE analyses revealed a clustering pattern of the two sheep breeds according to their geographical distribution. The genomic regions under putative selection identified by FST approaches revealed genes associated with adaptation to environments, metabolism, immune responses, growth and reproduction traits. Outputs of this study are to be used to develop optimum alternative improvement and dissemination schemes for Menz and Bonga sheep and a model scheme for other sheep breeds. Though preliminary, the genomic findings may represent in the future a breakthrough in improving the design of CBBP’s for increased performance of local sheep breeds in Ethiopia.