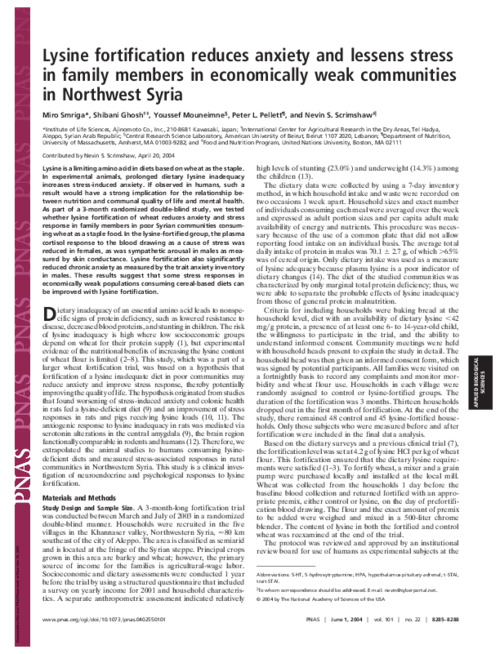 Lysine is a limiting amino acid in diets based on wheat as the staple. In experimental animals, prolonged dietary lysine inadequacy increases stress-induced anxiety. If observed in humans, such a result would have a strong implication for the relationship between nutrition and communal quality of life and mental health. As part of a 3-month randomized double-blind study, we tested whether lysine fortification of wheat reduces anxiety and stress response in family members in poor Syrian communities consuming wheat as a staple food. In the lysine-fortified group, the plasma cortisol response to the blood drawing as a cause of stress was reduced in females, as was sympathetic arousal in males as measured by skin conductance. Lysine fortification also significantly reduced chronic anxiety as measured by the trait anxiety inventory in males. These results suggest that some stress responses in economically weak populations consuming cereal-based diets can be improved with lysine fortification. Dietary inadequacy of an essential amino acid leads to nonspecific signs of protein deficiency, such as lowered resistance to disease, decreased blood proteins, and stunting in children. The risk of lysine inadequacy is high where low socioeconomic groups depend on wheat for their protein supply (1), but experimental evidence of the nutritional benefits of increasing the lysine content of wheat flour is limited (2–8). This study, which was a part of a larger wheat fortification trial, was based on a hypothesis that fortification of a lysine inadequate diet in poor communities may reduce anxiety and improve stress response, thereby potentially improving the quality of life. The hypothesis originated from studies that found worsening of stress-induced anxiety and colonic health in rats fed a lysine-deficient diet (9) and an improvement of stress responses in rats and pigs receiving lysine loads (10, 11). The anxiogenic response to lysine inadequacy in rats was mediated via serotonin alterations in the central amygdala (9), the brain region functionally comparable in rodents and humans (12). Therefore, we extrapolated the animal studies to humans consuming lysine-deficient diets and measured stress-associated responses in rural communities in Northwestern Syria. This study is a clinical investigation of neuroendocrine and psychological responses to lysine fortification.