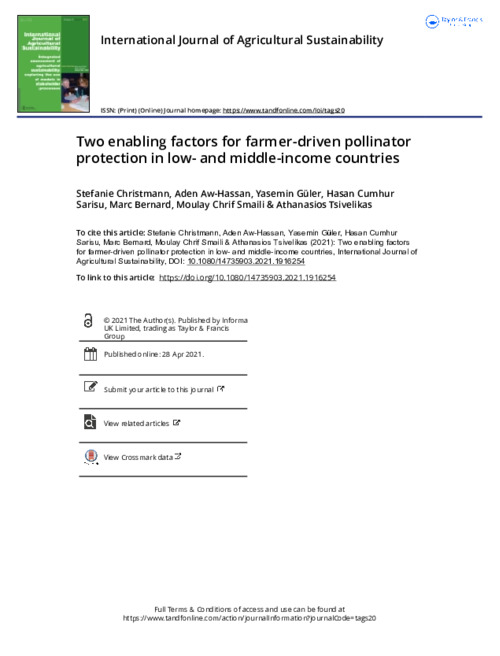 Reward-based wildflower strips are the most common approach for pollinator protection in high-income countries. Low- and middle-income countries cannot afford this practice. A promising pilot study in Uzbekistan introduced an alternative approach, Farming with Alternative Pollinators, focusing on farmers as target group, marketable habitat enhancement plants and a method-inherent incentive: higher income per surface achieved already in the first year. We hypothesized that higher income would be a replicable enabling factor across continents, but a knowledge-raising campaign would be necessary in many low- and middle-income countries. We assessed the replicability of the incentive with a small number of farmers in 2015–2016 in Morocco but focused on assessing if farmers have sufficient knowledge to recognize wild pollinators and use this approach. We conducted 766 interviews using a standardized questionnaire with randomly selected smallholder farmers in three culturally different farming societies of lowand middle-income countries (Morocco, Turkey and Benin). Farming with Alternative Pollinators induced higher income (75% (2015), 177% (2016)) also in Morocco. The trial and the survey show the indispensability of a knowledge-raising campaign as the second enabling factor. However, based on capacity building, Farming with Alternative Pollinators could have indeed high potential to promote pollinator protection in low- and middle-income countries.