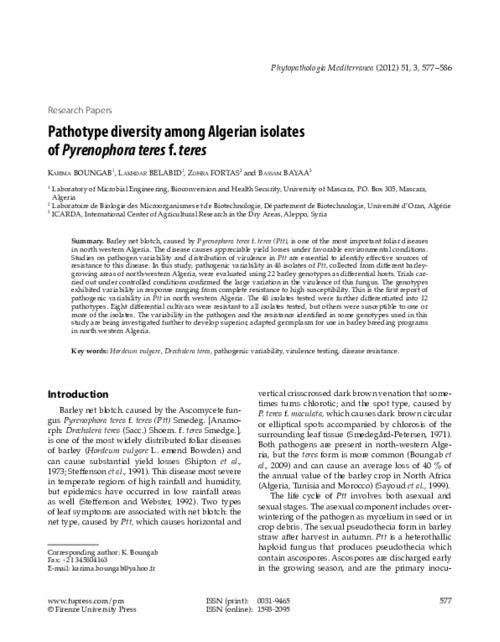 Barley net blotch, caused by Pyrenophora teres f. teres (Ptt), is one of the most important foliar diseases in north western Algeria. The disease causes appreciable yield losses under favorable environmental conditions. Studies on pathogen variability and distribution of virulence in Ptt are essential to identify effective sources of resistance to this disease. In this study, pathogenic variability in 48 isolates of Ptt, collected from different barley-growing areas of north-western Algeria, were evaluated using 22 barley genotypes as differential hosts. Trials carried out under controlled conditions confirmed the large variation in the virulence of this fungus. The genotypes exhibited variability in response ranging from complete resistance to high susceptibility. This is the first report of pathogenic variability in Ptt in north western Algeria. The 48 isolates tested were further differentiated into 12 pathotypes. Eight differential cultivars were resistant to all isolates tested, but others were susceptible to one or more of the isolates. The variability in the pathogen and the resistance identified in some genotypes used in this study are being investigated further to develop superior, adapted germplasm for use in barley breeding programs in north western Algeria.