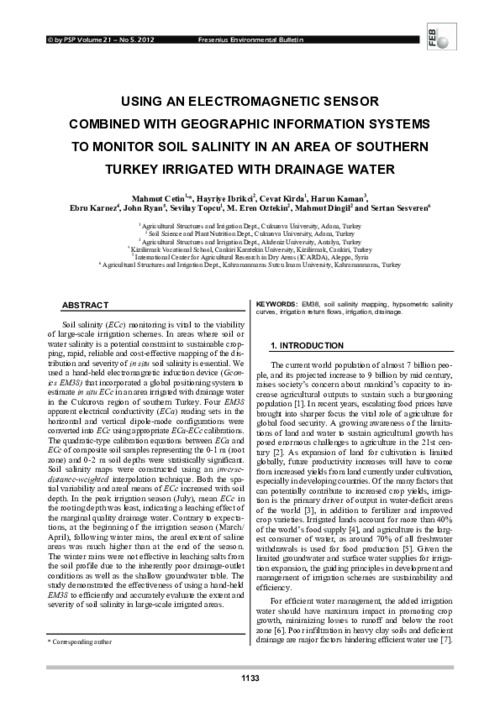 Soil salinity (ECe) monitoring is vital to the viability of large-scale irrigation schemes. In areas where soil or water salinity is a potential constraint to sustainable cropping, rapid, reliable and cost-effective mapping of the distribution and severity of in situ soil salinity is essential. We used a hand-held electromagnetic induction device (Geonics EM38) that incorporated a global positioning system to estimate in situ ECe in an area irrigated with drainage water in the Cukurova region of southern Turkey. Four EM38 apparent electrical conductivity (ECa) reading sets in the horizontal and vertical dipole-mode configurations were converted into ECe using appropriate ECa-ECe calibrations. The quadratic-type calibration equations between ECa and ECe of composite soil samples representing the 0-1 m (root zone) and 0-2 m soil depths were statistically significant. Soil salinity maps were constructed using an inversedistance-weighted interpolation technique. Both the spatial variability and areal means of ECe increased with soil depth. In the peak irrigation season (July), mean ECe in the rooting depth was least, indicating a leaching effect of the marginal quality drainage water. Contrary to expectations, at the beginning of the irrigation season (March/ April), following winter rains, the areal extent of saline areas was much higher than at the end of the season. The winter rains were not effective in leaching salts from the soil profile due to the inherently poor drainage-outlet conditions as well as the shallow groundwater table. The study demonstrated the effectiveness of using a hand-held EM38 to efficiently and accurately evaluate the extent and severity of soil salinity in large-scale irrigated areas.