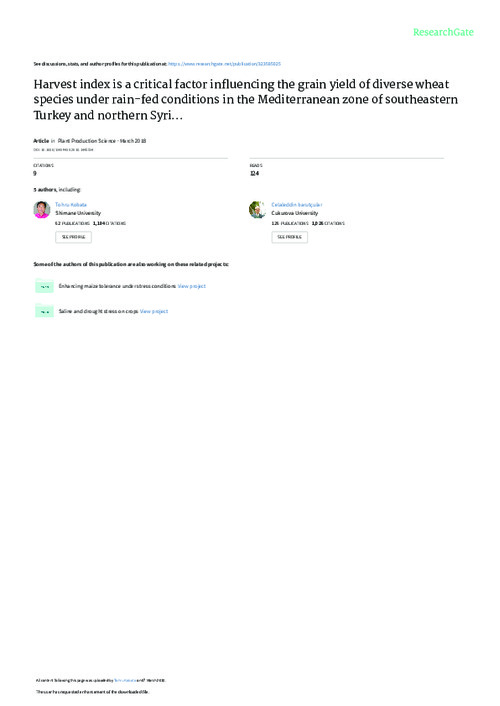 Environmental and plant factors critical to the grain yields of bread (Triticum aestivum L.), durum (T. durum L.) and emmer (T. dicoccum L.) wheat cultivars were investigated at two Mediterranean rain-fed eld sites: Adana in southeastern Turkey (2009 and 2010) and Aleppo in northern Syria (2009). The grain yield (GY) and biological yield (BY) of most cultivars were higher in Adana than in Aleppo, and the lower GY in Aleppo resulted from lower harvest index (HI) and lower BY due to higher temperatures and lower rainfall. The variations in the HI among cultivars were greater in Adana than in Aleppo. The GY was closely related to the HI but not the BY across cultivars at each site, and a higher GY was accompanied by a superior conversion-eciency of incident radiation during the grain lling period for grain yield [GY/Ra, where Ra is the cumulative radiation for 30days after heading (D30)] across all observations. The GY/Ra correlated negatively with the average temperature for D30, and higher HI values resulted in higher GY/Ra. In Adana, the time from anthesis to physiological-maturity decreased as the average temperature for D30 increased, resulting in a lower HI. Cultivars exhibiting the early heading trait can eectively escape the negative impacts of terminal high-temperature and water-shortage conditions on the HI. The results suggested that the HI is a critical factor for GY across diverse wheat cultivars under terminal high-temperatures and water-shortages in Mediterranean areas, and the BY is also an important factor under severe water-limitation conditions