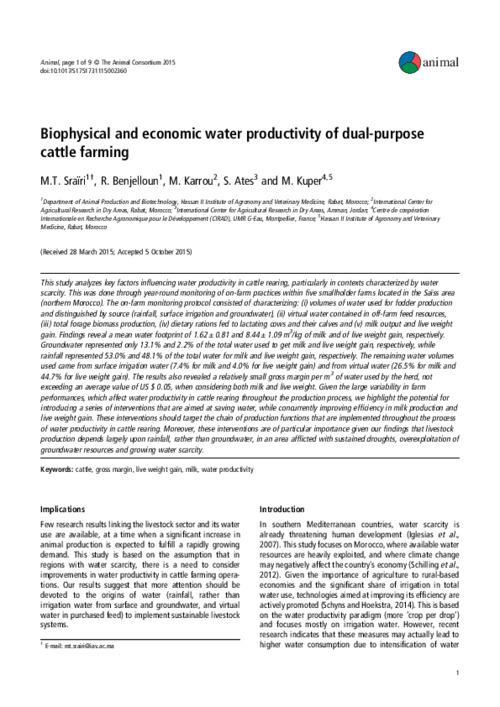 This study analyzes key factors inﬂuencing water productivity in cattle rearing, particularly in contexts characterized by water scarcity. This was done through year-round monitoring of on-farm practices within ﬁve smallholder farms located in the Saïss area (northern Morocco). The on-farm monitoring protocol consisted of characterizing: (i) volumes of water used for fodder production and distinguished by source (rainfall, surface irrigation and groundwater), (ii) virtual water contained in off-farm feed resources, (iii) total forage biomass production, (iv) dietary rations fed to lactating cows and their calves and (v) milk output and live weight gain. Findings reveal a mean water footprint of 1.62 ± 0.81 and 8.44 ± 1.09 m3/kg of milk and of live weight gain, respectively. Groundwater represented only 13.1% and 2.2% of the total water used to get milk and live weight gain, respectively, while rainfall represented 53.0% and 48.1% of the total water for milk and live weight gain, respectively. The remaining water volumes used came from surface irrigation water (7.4% for milk and 4.0% for live weight gain) and from virtual water (26.5% for milk and 44.7% for live weight gain). The results also revealed a relatively small gross margin per m3 of water used by the herd, not exceeding an average value of US $ 0.05, when considering both milk and live weight. Given the large variability in farm performances, which affect water productivity in cattle rearing throughout the production process, we highlight the potential for introducing a series of interventions that are aimed at saving water, while concurrently improving efﬁciency in milk production and live weight gain. These interventions should target the chain of production functions that are implemented throughout the process of water productivity in cattle rearing. Moreover, these interventions are of particular importance given our ﬁndings that livestock production depends largely upon rainfall, rather than groundwater, in an area afﬂicted with sustained droughts, overexploitation of groundwater resources and growing water scarcity.

use; water use efficiency