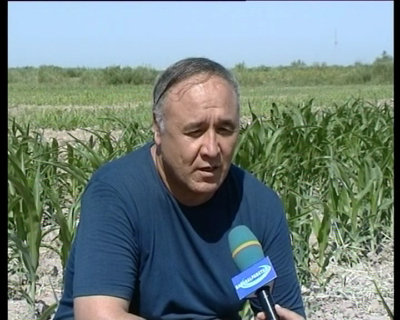 30 June, 2015. A field day was conducted on the demonstration site which attracted 48 visitors from Qorao’zak district farmers, Qorao’zak district authorities, researchers (Karakalpak Research Institute of Crop Husbandry and Central Asian Research Institute of Irrrigation), local and National TV and ICARDA. The field day was held in Qorako’l settlement, Qorao’zak district and was conducted on Mayli Balta Qipchoq farm. In the field day, the participants found an opportunity to see how to install and calibrate no-till drill. The participants also found an opportunity to enter into lively discussions with instructors on various economic and environmental aspects of CA farming in Karakalpakistan. Dr. Aziz Nurbekov and Mr. Bakhitbay Aybergenov acted as the facilitators of the field day. Footage was also taken for Karakalpak TV and Dunyo Bo’ylab TV.