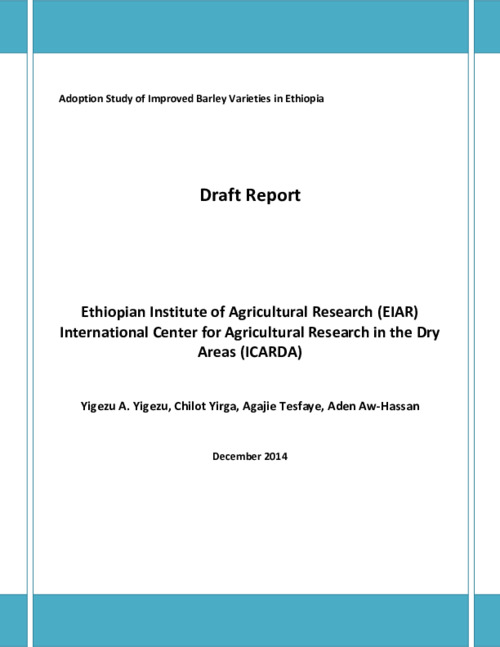 Poverty eradication is the fundamental development agenda of the government of Ethiopia. In response to this, all the development policies and strategies of the country are oriented towards the achievement of this goal. It is anticipated that effective and efficient implementation of these development polices and strategies using integrated and coordinated approaches is fundamental for eradicating poverty and dependence on food aid. Agricultural development, in Ethiopia, is the basis for eradicating poverty and ensuring food security. It is also the basis for promoting the development of other sectors of the economy. As a step forward, Ethiopia has set-up a five year (2010/11 – 2014/15) Growth and Transformation Plan (GTP) with a vision of building an economy which has a modern and productive agricultural sector with enhanced technology. One of the seven strategic pillars of GTP is also maintaining agriculture as a major source of economic growth (FDRE, 2010). Therefore, agriculture has been one of the sectors which received special attention for targeting in the GTP period. In the GTP period, more focus has been directed towards agriculture sector and it has been targeted that the growth of agriculture sector should be doubled. Integrated and coordinated efforts of the key development actors, such as governmental, non-governmental and international organizations are believed to be crucial to head towards achievement of the set development goal. In response to this fundamental development call, Ethiopian Institute of Agricultural Research (EIAR) and International Center for Agricultural Research in the Dry Areas (ICARDA) are endeavoring to contribute their best in enhancing agricultural productivity and addressing food insecurity concerns in Ethiopia. Within the agricultural sector, cereals are among the important commodities that contribute to food security significantly. Available estimates indicate that cereals account for roughly 60% of rural employments, 73% of total cultivated land, more than 40% of a typical household’s food expenditure, more than 60% of total caloric intake of a typical household in the country, and 30% of GDP (Shahidur and Asfaw Negassa, 2011, Diao et al., 2007). Among the cereals, barley is one of the top five crops in terms of production. CSA (2012) estimates indicate that about 1.6 million tons of barley was produced in the last three years (2008 – 2010) with per capita availability of 20 kg/annum (Table 1). In the last ten years (2000 – 2010), barley production grew at an average rate of 12% per annum while its area grew at an average annual growth rate of 6% (Figure 1). The growth in production is largely attributed to the use of productive improved varieties of barley and associated packages.