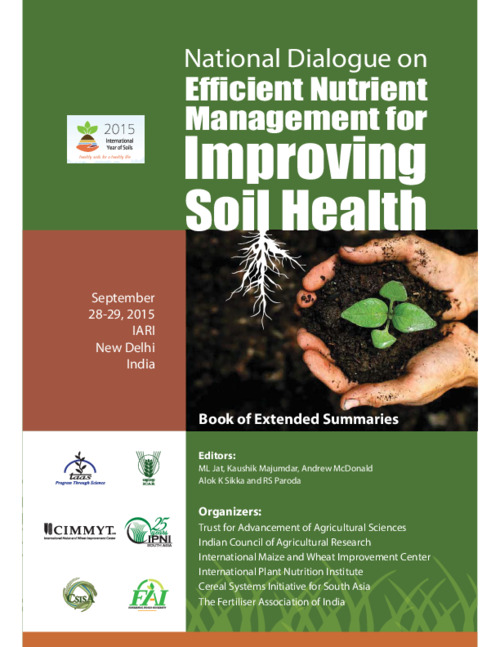 The challenges for agricultural scientists, farmers and policy planners for sustainable increase in food production to meet future food security needs are quite different and complex compared to that of pre-Green Revolution era. Nearly 94% of the agriculturally suitable land in South Asia is already under cultivation with limited scope for further horizontal expansion except rehabilitation of degraded land. Hence, the pressure on land will increase to produce more from the same area under cultivation. During past half century, the transformation of agriculture from ‘traditional animal based subsistence’ to ‘intensive chemical and machinery based’ production paradigm have though led to multifold increase in food production but also multiple problems associated with sustainability of natural resources especially deterioration in soil health. The soil organic carbon (SOC) contents in most cultivated soils of India is less than 5 g/kg compared with 15-20 g/kg in uncultivated virgin soils (Bhattacharyya, et al., 2000), attributed mainly to intensive tillage, removal/burning of crop residues, mining of soil fertility and intensive monotonous cropping systems. Large acreage of cultivated lands shows fertility fatigue and multiple nutrients deficiency in many intensively cropped areas of the region. This adds to our challenge of making farming more profitable and resilient for future food security. For example, during last five decades nutrient use in India has increased by 1573% with only 125% increase in food grain yield. Therefore, the use efficiency of inputs particularly nutrients has been declining at faster rate, posing a threat to future food security and environmental sustainability. In addition, still there exist large ‘management yield gaps’ in India ranging from 14 to 47%, 18 to 70% and 36 to 77% in wheat, rice and maize, respectively, significant portion of which is attributed to nutrient management (Jat et al; 2011).