Effect of agriculture practices and stocking rates on performances of Barbarine ewes grazing on wheat stubble in Tunisian semi-arid conditions. 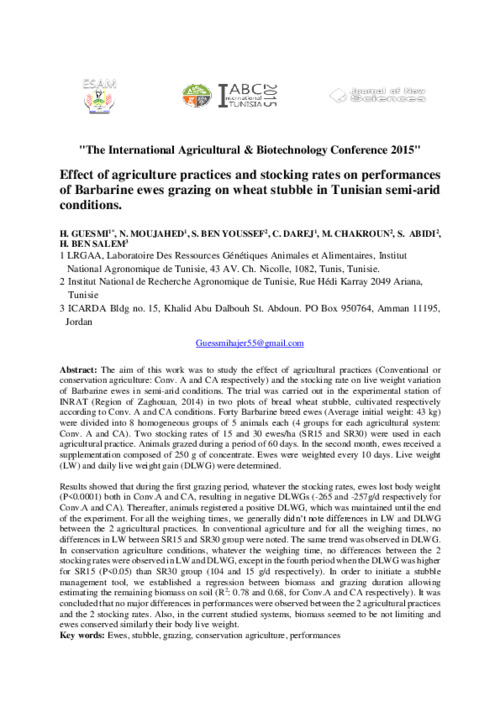 The aim of this work was to study the effect of agricultural practices (Conventional or conservation agriculture: Conv. A and CA respectively) and the stocking rate on live weight variation of Barbarine ewes in semi-arid conditions. The trial was carried out in the experimental station of INRAT (Region of Zaghouan, 2014) in two plots of bread wheat stubble, cultivated respectively according to Conv. A and CA conditions. Forty Barbarine breed ewes (Average initial weight: 43 kg) were divided into 8 homogeneous groups of 5 animals each (4 groups for each agricultural system: Conv. A and CA). Two stocking rates of 15 and 30 ewes/ha (SR15 and SR30) were used in each agricultural practice. Animals grazed during a period of 60 days. In the second month, ewes received a supplementation composed of 250 g of concentrate. Ewes were weighted every 10 days. Live weight (LW) and daily live weight gain (DLWG) were determined. Results showed that during the first grazing period, whatever the stocking rates, ewes lost body weight (P<0.0001) both in Conv.A and CA, resulting in negative DLWGs (-265 and -257g/d respectively for Conv.A and CA). Thereafter, animals registered a positive DLWG, which was maintained until the end of the experiment. For all the weighing times, we generally didn’t note differences in LW and DLWG between the 2 agricultural practices. In conventional agriculture and for all the weighing times, no differences in LW between SR15 and SR30 group were noted. The same trend was observed in DLWG. In conservation agriculture conditions, whatever the weighing time, no differences between the 2 stocking rates were observed in LW and DLWG, except in the fourth period when the DLWG was higher for SR15 (P<0.05) than SR30 group (104 and 15 g/d respectively). In order to initiate a stubble management tool, we established a regression between biomass and grazing duration allowing estimating the remaining biomass on soil (R2: 0.78 and 0.68, for Conv.A and CA respectively). It was concluded that no major differences in performances were observed between the 2 agricultural practices and the 2 stocking rates. Also, in the current studied systems, biomass seemed to be not limiting and ewes conserved similarly their body live weight.