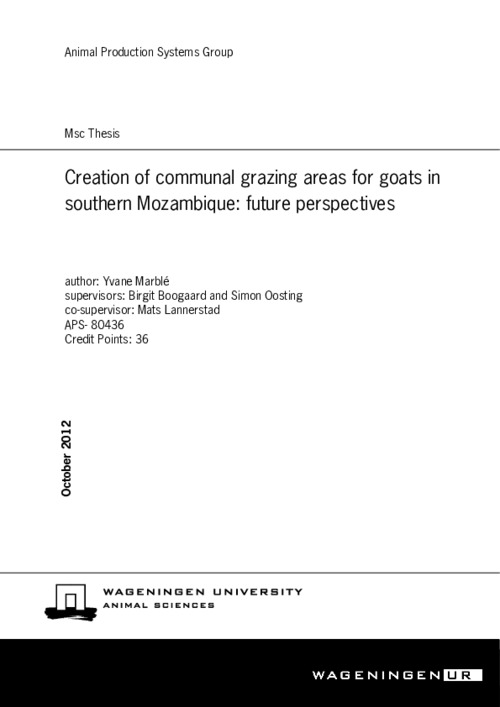 This thesis was carried out within the project ImGoats, a project led by ILRI and implemented by CARE in Mozambique, aiming at increasing the incomes andfood security of poor smallholders through innovations in the meat goat value chain. From a bottomup approach, the project developed different interventions and this thesis was focusing on one of them, the implementation of communal grazing land for goats, land that was not currently in use. From a literature review, it was defined that communal grazing lands were prone to land degradation and even more if goat was an actor, mainly due to its feeding behaviour. Furthermore, sociologists and economists explained this resource degradation by involving the communities of livestock smallholders and their ways of managing the grazing land. From this outlook, the main research question was defined as “What are the future perspectives of the newly designated communal grazing areas for goats in the ImGoats project communities?”. Perspectives that had two views: a more technical one that focused on the inventory of the pastures’ natural resources and the calculation of their different grazing capacities; and a more social part that implied interviews of the communities on their ideas about the future management of these pastures. For the field work, 6 communities and therefore 6 different pastures were visited. Concerning the pastures’ characteristics, it was found that there were differences among the different grazing land, especially in their sizes as it was going from 265 to more than 5.000 ha. The average grazing land was savannah woodland, composed of a vegetation of grasses with shrub/tree coverage of 35%. The average primary grass production was of 1.400kg DM.ha1.It were wide differences for the grazing capacities of the whole pastures, from less than 400 goats to 23.600 animals. From the interviews, two different themes were defined: the natural resources management (NRM) and issues on labour. From the NRM part, the topics that were developed were: the grazing pattern, the animal keeping system, the grazing dynamics, the mix cattle/goats, the burning practices, the water sources and the implementation of a maximum number of goats on the pastures. Concerning the labour, three different management types were found: the first system was described as a maximal intervention of producers, the second as the intervention of producers and paid labour and the third one as the minimal intervention of producers. From the obtained results, perspectives could be drawn on the future of these different pastures. Part of the perspectives were the main constraints that could hamper the success of the pastures’ implementation. These limits were identified as the herd mobility, the water and labour availability. It was therefore recommended that these three topics should be further discussed with the communities and that from the data collected for this thesis individual pasture management plans could be developed for the project communities. Recommendations concerning topics to be discussed with the communities were favoured over giving direct use rules that should be blindly followed. The pastures’ organisational charts should come from communities’ brainstorming with the help of experts, as one of the ImGoats project’s core principle was to adopt a bottomup approach.