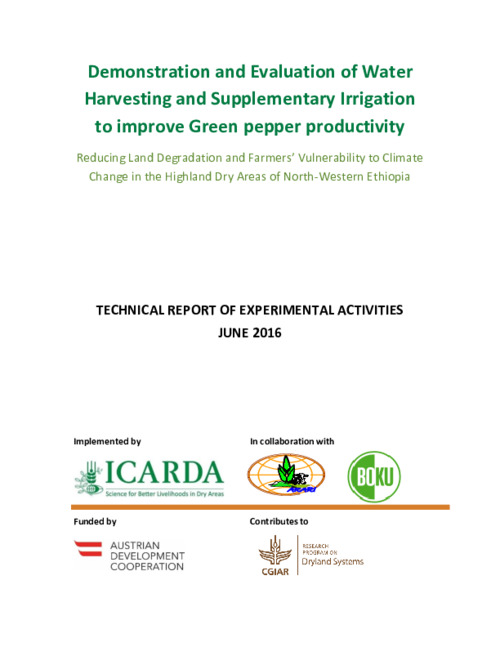 The effect of supplementary irrigation (SI) and nitrogen (N) fertiliser on the yield and yield components of green pepper was studied at Gumara-Maksegnit watershed, Gondar Zuria woreda, Amhara Region, Ethiopia, with budget with a budget support of ICARDA. In the study area the amount of annual rainfall ranges from 995 to 1175 mm, however; more than 70% of the rain falls within three months (from June to August). Hence, there is a concern on the occurrence of actual crop water stress which demands an urgent attention. In the watershed September is a peak time of flowering for many crops; thus water shortage at these stages can cause high yield penalty. Supplemental irrigation is the application of small amounts of water to rainfed crops during times when rainfall is limited for healthy plant growth, in order to improve and stabilize yields (Oweis and Hachum, 2012). Therefore, the experiment was done to evaluate pepper yield by supplementing different amounts of water at the time of the amount of rainfall is limited to support normal plant growth (starting from mid-September). The experiment was implemented at three farmers plot where rain water harvesting ponds were developed ICARDA for the purpose of supplemental irrigation. These farmers were fully involved during this experiment. The experiment was laid out in a systematic Split Plot Design (SPD), and investigated in the main cropping season of the year 2011 and 2012. There were four treatments of SI namely: control (only rainfed), supplying with 1/3 of the full SI (1/3 SI), supplying with 2/3 of the full SI (2/3 SI) and supplying full SI (Full SI); and three N fertilizer levels (0, 50 and 100 kg/ha). The SI was supplied in 7days interval at respective depths. The recommended amount of P2O5 fertilizer (92 kg/ha) was applied to each plot at transplanting. All the necessary management practices were the same for each plot. Data were analysed for variance and LSD at 5% level of significance. The result revealed that SI irrigation and N fertilizer application had significant effect on green pepper yield. The maximum yield was recorded at full SI (8.4mm) and 100kg/ha N fertilizer applications while, the least yield was obtained at non SI application (rainfed) with no fertilizer applications. Therefore, it is concluded that supplementary irrigation is necessary to cultivate green pepper in the Gummar-Maksgnit watershed. Further research should be done on the dissemination of the technologies to farmers.