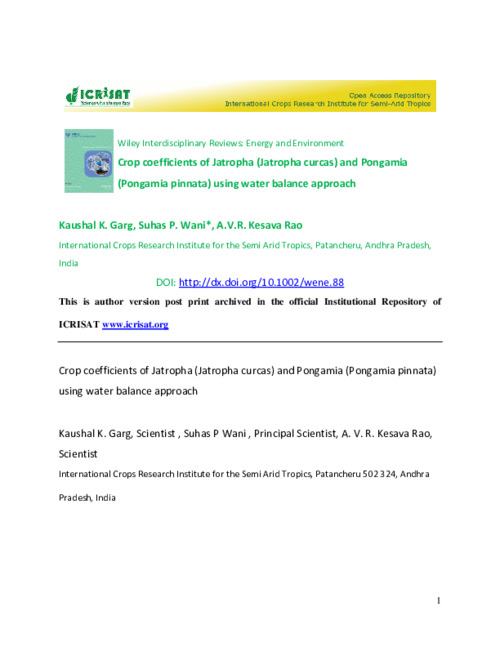 Jatropha and Pongamia are potential source of bio-diesel and grow in a wide range of agro climatic zones and soil conditions. Data and knowledge available on water requirement of Jatropha and Pongamia are very scarce. Crop coefficients are important parameters used for assessing water requirement and irrigation scheduling. In present study, crop coefficients of Jatropha and Pongamia were estimated using water balance approach. Temporal data on soil moisture at different depths in block plantations of Jatropha and Pongamia at ICRISAT farm, Patancheru in India were collected at 15 days interval between 2007 and 2010. Measured soil moisture data were analyzed using one dimensional water balance model. Results showed that annual water requirement of Jatropha is 750 mm and of Pongamia is about 950 mm in semi-arid tropics. Crop-coefficients of Jatropha ranged from 0.10 to 0.95 and of Pongamia from 0.30 to 1.10 depending on plant growth stage in different months. ICRISAT received 820 mm of rainfall in a normal year (data between 2001 and 2010) during the monsoon, of which 52 % (430 mm) contributed to evapo-transpiration, 34 % (280 mm) was stored in soil and, 14 % (110 mm) was lost through surface runoff. Stored soil moisture during monsoon season was subsequently utilized by the Jatropha and 270 mm converted into ET during non-monsoonal period. Pongamia utilized stored soil moisture more effectively than Jatropha as it could remove water from deeper soil layers even at high levels of soil moisture suction.