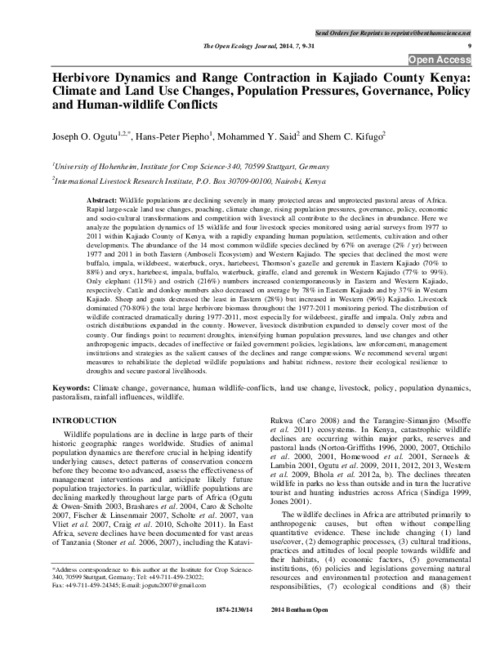 Wildlife populations are declining severely in many protected areas and unprotected pastoral areas of Africa. Rapid large-scale land use changes, poaching, climate change, rising population pressures, governance, policy, economic and socio-cultural transformations and competition with livestock all contribute to the declines in abundance. Here we analyze the population dynamics of 15 wildlife and four livestock species monitored using aerial surveys from 1977 to 2011 within Kajiado County of Kenya, with a rapidly expanding human population, settlements, cultivation and other developments. The abundance of the 14 most common wildlife species declined by 67% on average (2% / yr) between 1977 and 2011 in both Eastern (Amboseli Ecosystem) and Western Kajiado. The species that declined the most were buffalo, impala, wildebeest, waterbuck, oryx, hartebeest, Thomson’s gazelle and gerenuk in Eastern Kajiado (70% to 88%) and oryx, hartebeest, impala, buffalo, waterbuck, giraffe, eland and gerenuk in Western Kajiado (77% to 99%). Only elephant (115%) and ostrich (216%) numbers increased contemporaneously in Eastern and Western Kajiado, respectively. Cattle and donkey numbers also decreased on average by 78% in Eastern Kajiado and by 37% in Western Kajiado. Sheep and goats decreased the least in Eastern (28%) but increased in Western (96%) Kajiadio. Livestock dominated (70-80%) the total large herbivore biomass throughout the 1977-2011 monitoring period. The distribution of wildlife contracted dramatically during 1977-2011, most especially for wildebeest, giraffe and impala. Only zebra and ostrich distributions expanded in the county. However, livestock distribution expanded to densely cover most of the county. Our findings point to recurrent droughts, intensifying human population pressures, land use changes and other anthropogenic impacts, decades of ineffective or failed government policies, legislations, law enforcement, management institutions and strategies as the salient causes of the declines and range compressions. We recommend several urgent measures to rehabilitate the depleted wildlife populations and habitat richness, restore their ecological resilience to droughts and secure pastoral livelihoods.