Carbon Sequestration in Indian Soils: Present Status and the Potential 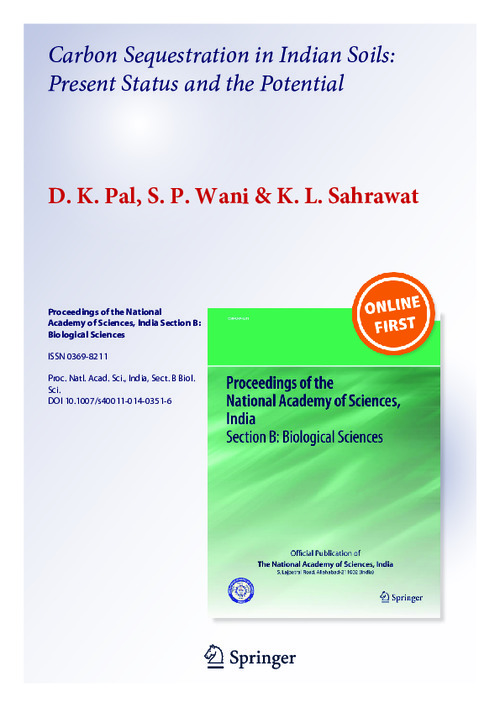 India’s growing self-sufficiency in food production and food stocks since independence suggest that soils have the capacity to produce. Therefore, a review of Indian soils and their capacity to sequester carbon; and the factors favouring C sequestration under different land uses is in order. Several researchers, especially those in The National Bureau of Soil Survey and Land Use Planning and the International Crops Research Institute for Semi-Arid Tropics monitored the changes in soil organic (SOC) and inorganic (SIC) carbon as influenced by land use in the Indo-Gangetic Alluvial Plains and black soil regions between 1980 and 2005. The results showed an increase in SOC stocks due to turnover of greater plant biomass into the soil. Results of long-term fertilizer experiments with rice-based double or triple cropping systems indicate soil’s capacity to store greater C, and maintain higher C in passive pools and that active fraction of soil C can be used as an indicator of soil health. The inclusion of active pool/ labile SOC is expected to improve the performance of Century eco-system model in predicting SOC changes under different climatic conditions. Greenhouse gas emissions from the tropical Indian soils (both zeolitic and nonzeolitic) do not seem to contribute significantly to the global warming potential. The application NPK plus FYM emerged as a cost effective technology for Indian farmers In view of the potential of C sequestration by major zeolitic and non-zeolitic soils, the present SOC stock of about 30 Pg can be further increased