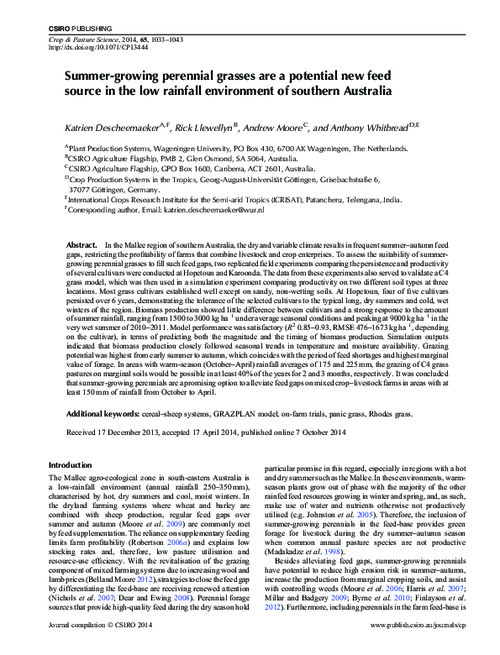 In the Mallee region of southern Australia, the dry and variable climate results in frequent summer–autumn feed gaps, restricting the profitability of farms that combine livestock and crop enterprises. To assess the suitability of summergrowing perennial grasses to fill such feed gaps, two replicated field experiments comparing the persistence and productivity of several cultivars were conducted at Hopetoun and Karoonda. The data from these experiments also served to validate a C4 grass model, which was then used in a simulation experiment comparing productivity on two different soil types at three locations. Most grass cultivars established well except on sandy, non-wetting soils. At Hopetoun, four of five cultivars persisted over 6 years, demonstrating the tolerance of the selected cultivars to the typical long, dry summers and cold, wet winters of the region. Biomass production showed little difference between cultivars and a strong response to the amount of summer rainfall, ranging from 1500 to 3000 kg ha–1 under average seasonal conditions and peaking at 9000 kg ha–1 in the very wet summer of 2010–2011. Model performance was satisfactory (R2 0.85–0.93, RMSE 476–1673 kg ha–1, depending on the cultivar), in terms of predicting both the magnitude and the timing of biomass production. Simulation outputs indicated that biomass production closely followed seasonal trends in temperature and moisture availability. Grazing potential was highest from early summer to autumn, which coincides with the period of feed shortages and highest marginal value of forage. In areas with warm-season (October–April) rainfall averages of 175 and 225 mm, the grazing of C4 grass pastures on marginal soils would be possible in at least 40% of the years for 2 and 3 months, respectively. It was concluded that summer-growing perennials are a promising option to alleviate feed gaps on mixed crop–livestock farms in areas with at least 150mm of rainfall from October to April.