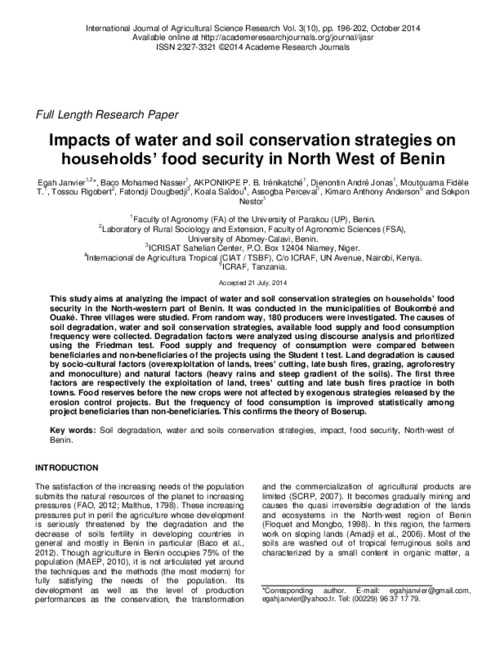 This study aims at analyzing the impact of water and soil conservation strategies on households’ food security in the North-western part of Benin. It was conducted in the municipalities of Boukombé and Ouaké. Three villages were studied. From random way, 180 producers were investigated. The causes of soil degradation, water and soil conservation strategies, available food supply and food consumption frequency were collected. Degradation factors were analyzed using discourse analysis and prioritized using the Friedman test. Food supply and frequency of consumption were compared between beneficiaries and non-beneficiaries of the projects using the Student t test. Land degradation is caused by socio-cultural factors (overexploitation of lands, trees’ cutting, late bush fires, grazing, agroforestry and monoculture) and natural factors (heavy rains and steep gradient of the soils). The first three factors are respectively the exploitation of land, trees’ cutting and late bush fires practice in both towns. Food reserves before the new crops were not affected by exogenous strategies released by the erosion control projects. But the frequency of food consumption is improved statistically among project beneficiaries than non-beneficiaries. This confirms the theory of Boserup