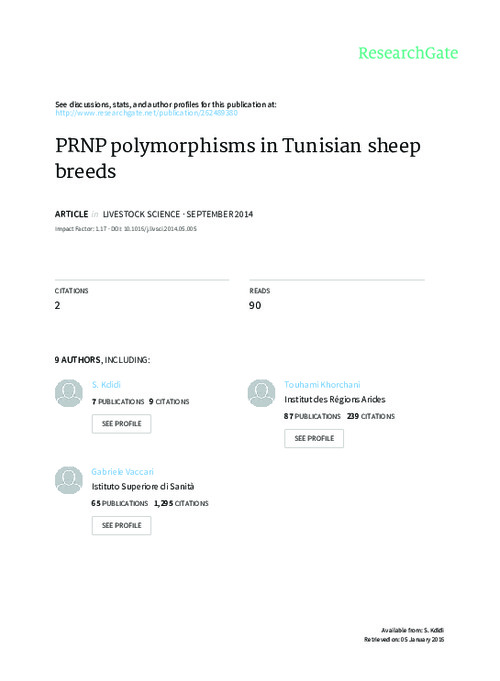 In this study, genetic variation of ovine prion protein in Tunisian sheep breeds was analysed. Sequencing of the entire coding sequence of prion protein gene (PRNP) was performed in a total of 201 samples belonging to four breeds (Barbarin, Western Thin Tail, Sicilo Sarde and Black Thibar). Five haplotypes (ARQ, ARR, ARH, AHQ and VRQ) and 10 genotypes were observed based on codons 136, 154 and 171, with different frequencies among the investigated breeds. The ARQ, ARR and ARH haplotypes were present in all breeds, the VRQ haplotype was observed at low frequencies in Barbarin and Western Thin Tail breeds. The ARQ and ARR haplotypes were the most common with frequencies ranging from 33.4% to 47.8% and from 26.5% to 46.5% respectively, in the different breeds. Moreover, 12 additional non-synonymous (Q101R, M112T, G127S/V, M137T, L141F, H143R, N146S, R151G, Y172D, N176K and H180Y) as well as 2 synonymous polymorphisms at codons 231 and 237 were found in the PRNP gene. Among them, the R151G polymorphism has never been described in sheep. Moreover an insertion of an octarepeat in the ARQ haplotype has been observed. These results represent the first survey on PRNP variability in Tunisian sheep and may serve as basis for the development of breeding programme to increase scrapie resistance in national sheep breeds.