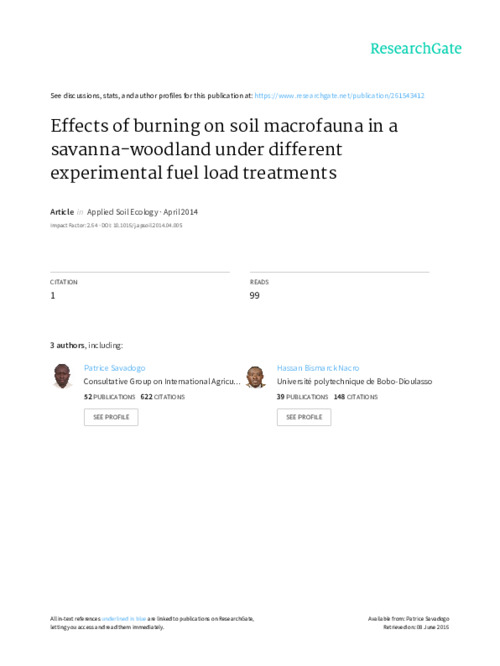 In West African savanna-woodland, the use of prescribed burning as a management tool has ecological implications for the soil biota. Yet, the effects of fire on soil inhabiting organisms are poorly understood. The aim of this study was to examine the responses of soil macro-invertebrates to early fires in a Sudanian savanna-woodland on a set of experimental plots subject to different fuel load treatments. The abundance of major macro-invertebrate taxa and functional groups, and taxon richness were quantified in soil cores collected from three different soil layers before and immediately after burning. The results indicated that, overall, there was substantial spatial and temporal variation in the composition of macroinvertebrate assemblages. The immediate effects of fire were to reduce total invertebrate numbers and numbers of many invertebrate groups dramatically. This is probably due to the fact that many of the surface-dwelling macrofauna perished as a result of less favorable microclimate due to fire, diminished resources, or migrate to safer environments. Fuel load treatment did not affect the community taxonomic richness or abundance of the soil-dwelling fauna. Furthermore, annual changes in community composition were more pronounced at the burnt site than in the control. This could be related to the inter-annual difference in precipitation pattern recorded during the two-year study period at our site. Since soil macrofauna population declines in fire-disturbed areas, increasing fire prevalence may jeopardize the long-term conservation of fire sensitive macrofauna groups. Special fire management attention is therefore recommended with due consideration to the type of burning and fuel properties to avoid the detrimental effects of intense fire affecting the resilience of savanna soil macrofauna species.