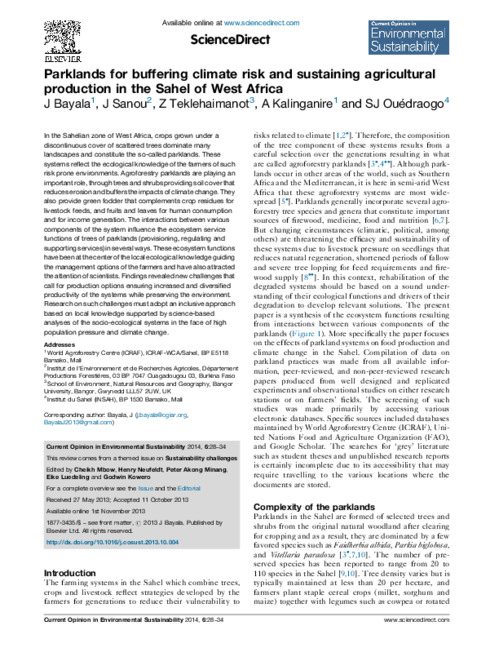 In the Sahelian zone of West Africa, crops grown under a discontinuous cover of scattered trees dominate many landscapes and constitute the so-called parklands. These systems reflect the ecological knowledge of the farmers of such risk prone environments. Agroforestry parklands are playing an important role, through trees and shrubs providing soil cover that reduces erosion and buffers the impacts of climate change. They also provide green fodder that complements crop residues for livestock feeds, and fruits and leaves for human consumption and for income generation. The interactions between various components of the system influence the ecosystem service functions of trees of parklands (provisioning, regulating and supporting services) in several ways. These ecosystem functions have been at the center of the local ecological knowledge guiding the management options of the farmers and have also attracted the attention of scientists. Findings revealed new challenges that call for production options ensuring increased and diversified productivity of the systems while preserving the environment. Research on such challenges must adopt an inclusive approach based on local knowledge supported by science-based analyses of the socio-ecological systems in the face of high population pressure and climate change.