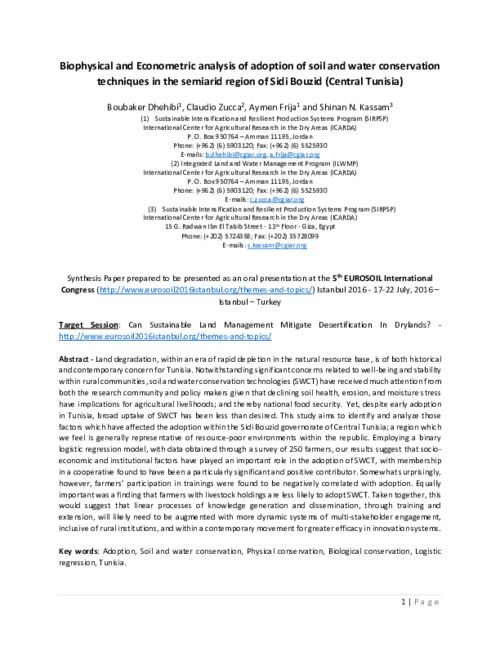 Synthesis Paper prepared to be presented as an oral presentation at the 5th EUROSOIL International Congress (http://www.eurosoil2016istanbul.org/themes-and-topics/) Istanbul 2016 - 17-22 July, 2016 – Istanbul – Turkey Land degradation, within an era of rapid depletion in the natural resource base, is of both historical and contemporary concern for Tunisia. Notwithstanding significant concerns related to well-being and stability within rural communities, soil and water conservation technologies (SWCT) have received much attention from both the research community and policy makers given that declining soil health, erosion, and moisture stress have implications for agricultural livelihoods; and thereby national food security. Yet, despite early adoption in Tunisia, broad uptake of SWCT has been less than desired. This study aims to identify and analyze those factors which have affected the adoption within the Sidi Bouzid governorate of Central Tunisia; a region which we feel is generally representative of resource-poor environments within the republic. Employing a binary logistic regression model, with data obtained through a survey of 250 farmers, our results suggest that socio-economic and institutional factors have played an important role in the adoption of SWCT, with membership in a cooperative found to have been a particularly significant and positive contributor. Somewhat surprisingly, however, farmers’ participation in trainings were found to be negatively correlated with adoption. Equally important was a finding that farmers with livestock holdings are less likely to adopt SWCT. Taken together, this would suggest that linear processes of knowledge generation and dissemination, through training and extension, will likely need to be augmented with more dynamic systems of multi-stakeholder engagement, inclusive of rural institutions, and within a contemporary movement for greater efficacy in innovation systems.