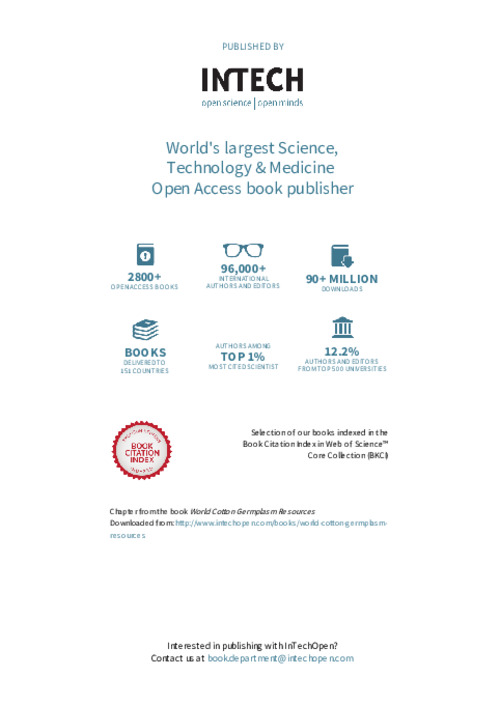 The economy of Pakistan relies heavily on cotton, which contributes ~60% of total foreign exchange earnings (US$ 15 billion in 2012/13). Cotton is grown on about three million hectares annually with average lint production of 670 kg ha-1. Historically the cultivation of cotton can be traced back to 6000 BC with Gossypium arboreum L. identified in the ancient remains of Monjadharo (Sindh) [1]. The indigenous cultivated cotton is locally known as Desi cotton, which carries the A-genome [2-3]. Following the industrial revolution in the textile sector, the tetraploid Gossypium hirsutum L. gradually replaced G. arboreum L., because it generally produces a higher quality lint and has a higher seed cotton yield (SCY) in the Indo-Pak region. These American types originated from New Orleans and Georgia were first introduced in 1818 [4]. This material was primarily a mixture and did not attract the interest of farmers in its initial years of cultivation because of high susceptibility to sucking insects, particularly jassids (Amarasca devastans Dist.). Organized selection procedures were adopted to select genotypes suited to the local conditions that laid a concrete foundation for breeding material on the subcontinent.