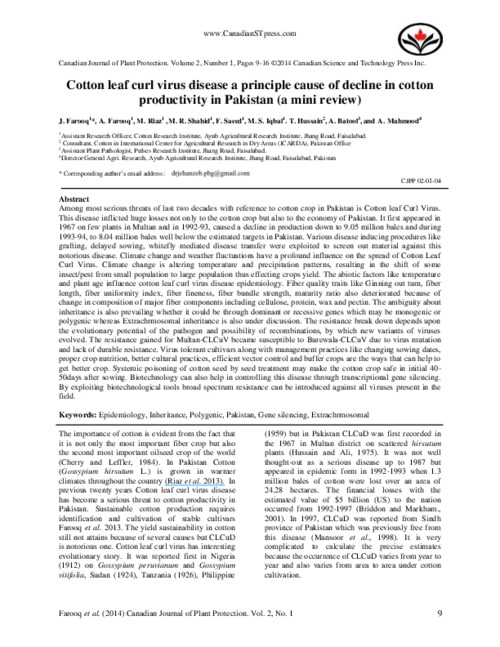 Among most serious threats of last two decades with reference to cotton crop in Pakistan is Cotton leaf Curl Virus. This disease inflicted huge losses not only to the cotton crop but also to the economy of Pakistan. It first appeared in 1967 on few plants in Multan and in 1992-93, caused a decline in production down to 9.05 million bales and during 1993-94, to 8.04 million bales well below the estimated targets in Pakistan. Various disease inducing procedures like grafting, delayed sowing, whitefly mediated disease transfer were exploited to screen out material against this notorious disease. Climate change and weather fluctuations have a profound influence on the spread of Cotton Leaf Curl Virus. Climate change is altering temperature and precipitation patterns, resulting in the shift of some insect/pest from small population to large population thus effecting crops yield. The abiotic factors like temperature and plant age influence cotton leaf curl virus disease epidemiology. Fiber quality traits like Ginning out turn, fiber length, fiber uniformity index, fiber fineness, fiber bundle strength, maturity ratio also deteriorated because of change in composition of major fiber components including cellulose, protein, wax and pectin. The ambiguity about inheritance is also prevailing whether it could be through dominant or recessive genes which may be monogenic or polygenic whereas Extrachrmosomal inheritance is also under discussion. The resistance break down depends upon the evolutionary potential of the pathogen and possibility of recombinations, by which new variants of viruses evolved. The resistance gained for Multan-CLCuV became susceptible to Burewala-CLCuV due to virus mutation and lack of durable resistance. Virus tolerant cultivars along with management practices like changing sowing dates, proper crop nutrition, better cultural practices, efficient vector control and buffer crops are the ways that can help to get better crop. Systemic poisoning of cotton seed by seed treatment may make the cotton crop safe in initial 40-50days after sowing. Biotechnology can also help in controlling this disease through transcriptional gene silencing. By exploiting biotechnological tools broad spectrum resistance can be introduced against all viruses present in the field.