Genetic diversity at EST-SSR markers and its relationship to ODAP content under heat stress in grass pea (Lathyrus sativus L.) 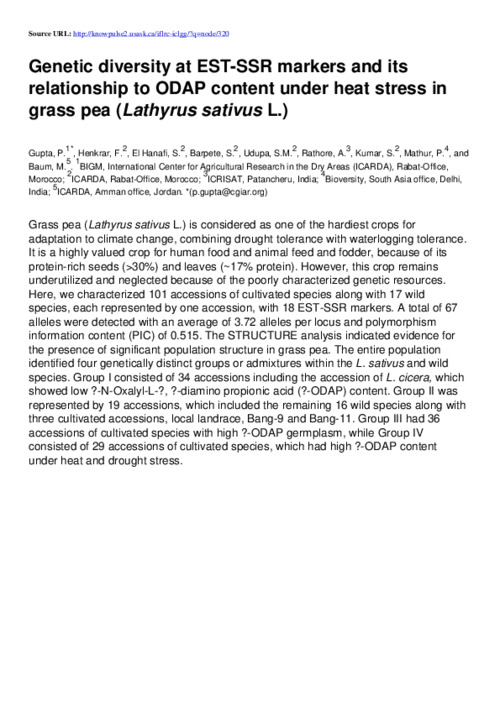 Grass pea (Lathyrus sativus L.) is considered as one of the hardiest crops for adaptation to climate change, combining drought tolerance with waterlogging tolerance. It is a highly valued crop for human food and animal feed and fodder, because of its protein-rich seeds (>30%) and leaves (~17% protein). However, this crop remains underutilized and neglected because of the poorly characterized genetic resources. Here, we characterized 101 accessions of cultivated species along with 17 wild species, each represented by one accession, with 18 EST-SSR markers. A total of 67 alleles were detected with an average of 3.72 alleles per locus and polymorphism information content (PIC) of 0.515. The STRUCTURE analysis indicated evidence for the presence of significant population structure in grass pea. The entire population identified four genetically distinct groups or admixtures within the L. sativus and wild species. Group I consisted of 34 accessions including the accession of L. cicera, which showed low ?-N-Oxalyl-L-?, ?-diamino propionic acid (?-ODAP) content. Group II was represented by 19 accessions, which included the remaining 16 wild species along with three cultivated accessions, local landrace, Bang-9 and Bang-11. Group III had 36 accessions of cultivated species with high ?-ODAP germplasm, while Group IV consisted of 29 accessions of cultivated species, which had high ?-ODAP content under heat and drought stress.