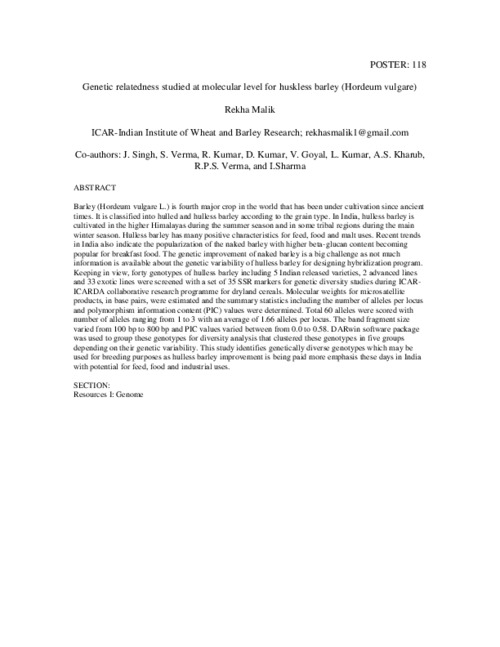 Barley (Hordeum vulgare L.) is fourth major crop in the world that has been under cultivation since ancient times. It is classified into hulled and hulless barley according to the grain type. In India, hulless barley is cultivated in the higher Himalayas during the summer season and in some tribal regions during the main winter season. Hulless barley has many positive characteristics for feed, food and malt uses. Recent trends in India also indicate the popularization of the naked barley with higher beta-glucan content becoming popular for breakfast food. The genetic improvement of naked barley is a big challenge as not much information is available about the genetic variability of hulless barley for designing hybridization program. Keeping in view, forty genotypes of hulless barley including 5 Indian released varieties, 2 advanced lines and 33 exotic lines were screened with a set of 35 SSR markers for genetic diversity studies during ICARICARDA collaborative research programme for dryland cereals. Molecular weights for microsatellite products, in base pairs, were estimated and the summary statistics including the number of alleles per locus and polymorphism information content (PIC) values were determined. Total 60 alleles were scored with number of alleles ranging from 1 to 3 with an average of 1.66 alleles per locus. The band fragment size varied from 100 bp to 800 bp and PIC values varied between from 0.0 to 0.58. DARwin software package was used to group these genotypes for diversity analysis that clustered these genotypes in five groups depending on their genetic variability. This study identifies genetically diverse genotypes which may be used for breeding purposes as hulless barley improvement is being paid more emphasis these days in India with potential for feed, food and industrial uses