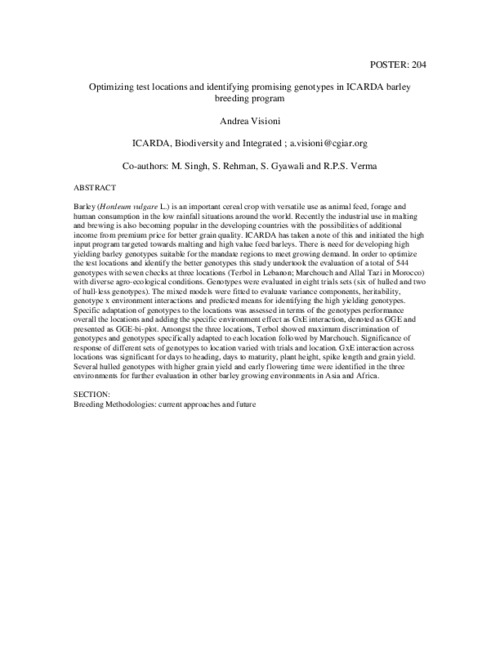 Barley (Hordeum vulgare L.) is an important cereal crop with versatile use as animal feed, forage and human consumption in the low rainfall situations around the world. Recently the industrial use in malting and brewing is also becoming popular in the developing countries with the possibilities of additional income from premium price for better grain quality. ICARDA has taken a note of this and initiated the high input program targeted towards malting and high value feed barleys. There is need for developing high yielding barley genotypes suitable for the mandate regions to meet growing demand. In order to optimize the test locations and identify the better genotypes this study undertook the evaluation of a total of 544 genotypes with seven checks at three locations (Terbol in Lebanon; Marchouch and Allal Tazi in Morocco) with diverse agro-ecological conditions. Genotypes were evaluated in eight trials sets (six of hulled and two of hull-less genotypes). The mixed models were fitted to evaluate variance components, heritability, genotype x environment interactions and predicted means for identifying the high yielding genotypes. Specific adaptation of genotypes to the locations was assessed in terms of the genotypes performance overall the locations and adding the specific environment effect as GxE interaction, denoted as GGE and presented as GGE-bi-plot. Amongst the three locations, Terbol showed maximum discrimination of genotypes and genotypes specifically adapted to each location followed by Marchouch. Significance of response of different sets of genotypes to location varied with trials and location. GxE interaction across locations was significant for days to heading, days to maturity, plant height, spike length and grain yield. Several hulled genotypes with higher grain yield and early flowering time were identified in the three environments for further evaluation in other barley growing environments in Asia and Africa.