Characterization of Indigenous Goat Populations in Selected Areas of Ethiopia 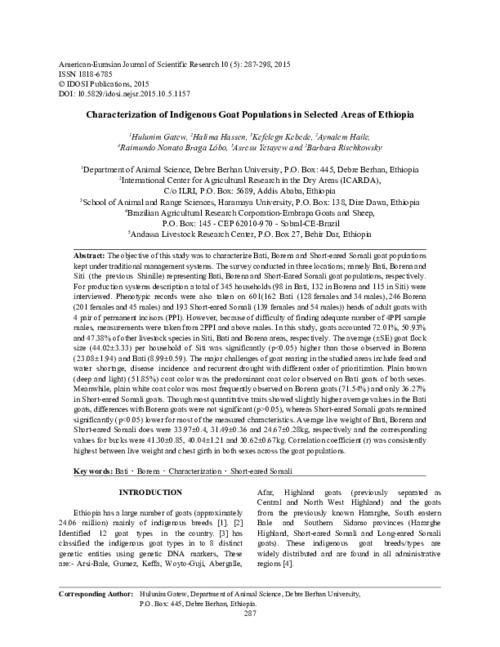 The objective of this study was to characterize Bati, Borena and Short-eared Somali goat populations kept under traditional management systems. The survey conducted in three locations; namely Bati, Borena and Siti (the previous Shinille) representing Bati, Borena and Short-Eared Somali goat populations, respectively. For production systems description a total of 345 households (98 in Bati, 132 in Borena and 115 in Siti) were interviewed. Phenotypic records were also taken on 601(162 Bati (128 females and 34 males), 246 Borena (201 females and 45 males) and 193 Short-eared Somali (139 females and 54 males)) heads of adult goats with 4 pair of permanent incisors (PPI). However, because of difficulty of finding adequate number of 4PPI sample males, measurements were taken from 2PPI and above males. In this study, goats accounted 72.01%, 50.93% and 47.38% of other livestock species in Siti, Bati and Borena areas, respectively. The average (±SE) goat flock size (44.02±3.33) per household of Siti was significantly (p<0.05) higher than those observed in Borena (23.08±1.94) and Bati (8.99±0.59). The major challenges of goat rearing in the studied areas include feed and water shortage, disease incidence and recurrent drought with different order of prioritization. Plain brown (deep and light) (51.85%) coat color was the predominant coat color observed on Bati goats of both sexes. Meanwhile, plain white coat color was most frequently observed on Borena goats (71.54%) and only 36.27% in Short-eared Somali goats. Though most quantitative traits showed slightly higher average values in the Bati goats, differences with Borena goats were not significant (p>0.05), whereas Short-eared Somali goats remained significantly (p<0.05) lower for most of the measured characteristics. Average live weight of Bati, Borena and Short-eared Somali does were 33.97±0.4, 31.49±0.36 and 24.67±0.28kg, respectively and the corresponding values for bucks were 41.30±0.85, 40.04±1.21 and 30.62±0.67kg. Correlation coefficient (r) was consistently highest between live weight and chest girth in both sexes across the goat populations.