Crop diversification: the ‘old’ weapon in the hands of Ethiopian farmers 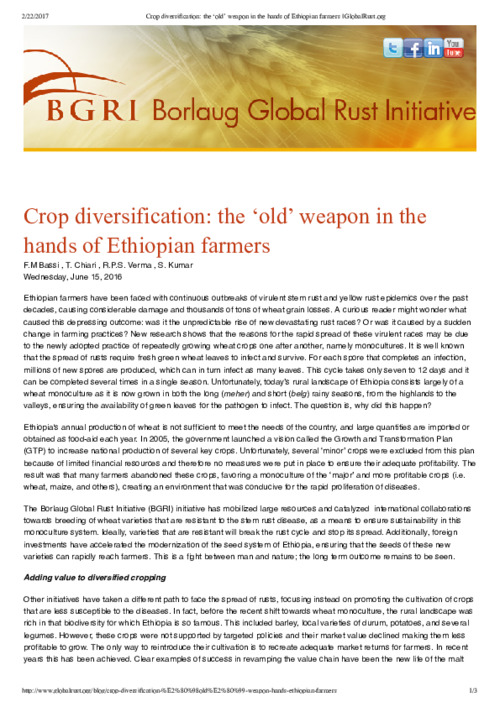 Ethiopian farmers have been faced with continuous outbreaks of virulent stem rust and yellow rust epidemics over the past decades, causing considerable damage and thousands of tons of wheat grain losses. A curious reader might wonder what caused this depressing outcome: was it the unpredictable rise of new devastating rust races? Or was it caused by a sudden change in farming practices? New research shows that the reasons for the rapid spread of these virulent races may be due to the newly adopted practice of repeatedly growing wheat crops one after another, namely monocultures. It is well known that the spread of rusts require fresh green wheat leaves to infect and survive. For each spore that completes an infection, millions of new spores are produced, which can in turn infect as many leaves. This cycle takes only seven to 12 days and it can be completed several times in a single season. Unfortunately, today’s rural landscape of Ethiopia consists largely of a wheat monoculture as it is now grown in both the long (meher) and short (belg) rainy seasons, from the highlands to the valleys, ensuring the availability of green leaves for the pathogen to infect. The question is, why did this happen? Ethiopia's annual production of wheat is not sufficient to meet the needs of the country, and large quantities are imported or obtained as food-aid each year. In 2005, the government launched a vision called the Growth and Transformation Plan (GTP) to increase national production of several key crops. Unfortunately, several ‘minor’ crops were excluded from this plan because of limited financial resources and therefore no measures were put in place to ensure their adequate profitability. The result was that many farmers abandoned these crops, favoring a monoculture of the ‘major’ and more profitable crops (i.e. wheat, maize, and others), creating an environment that was conducive for the rapid proliferation of diseases. The Borlaug Global Rust Initiative (BGRI) initiative has mobilized large resources and catalyzed international collaborations towards breeding of wheat varieties that are resistant to the stem rust disease, as a means to ensure sustainability in this monoculture system. Ideally, varieties that are resistant will break the rust cycle and stop its spread. Additionally, foreign investments have accelerated the modernization of the seed system of Ethiopia, ensuring that the seeds of these new varieties can rapidly reach farmers. This is a fight between man and nature; the long term outcome remains to be seen.