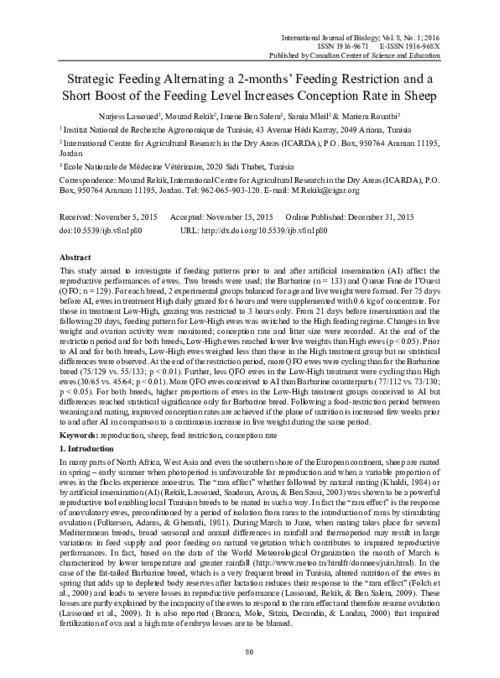 This study aimed to investigate if feeding patterns prior to and after artificial insemination (AI) affect the reproductive performances of ewes. Two breeds were used; the Barbarine (n = 133) and Queue Fine de l’Ouest (QFO; n = 129). For each breed, 2 experimental groups balanced for age and live weight were formed. For 75 days before AI, ewes in treatment High daily grazed for 6 hours and were supplemented with 0.6 kg of concentrate. For those in treatment Low-High, grazing was restricted to 3 hours only. From 21 days before insemination and the following 20 days, feeding pattern for Low-High ewes was switched to the High feeding regime. Changes in live weight and ovarian activity were monitored; conception rate and litter size were recorded. At the end of the restriction period and for both breeds, Low-High ewes reached lower live weights than High ewes (p < 0.05). Prior to AI and for both breeds, Low-High ewes weighed less than those in the High treatment group but no statistical differences were observed. At the end of the restriction period, more QFO ewes were cycling than for the Barbarine breed (75/129 vs. 55/133; p < 0.01). Further, less QFO ewes in the Low-High treatment were cycling than High ewes (30/65 vs. 45/64; p < 0.01). More QFO ewes conceived to AI than Barbarine counterparts (77/112 vs. 73/130; p < 0.05). For both breeds, higher proportions of ewes in the Low-High treatment groups conceived to AI but differences reached statistical significance only for Barbarine breed. Following a food-restriction period between weaning and mating, improved conception rates are achieved if the plane of nutrition is increased few weeks prior to and after AI in comparison to a continuous increase in live weight during the same period.