Gene Flow as a Source of Adaptation of Durum Wheat to Changing Conditions Including Climate Change: Double Gradient Selection Technique 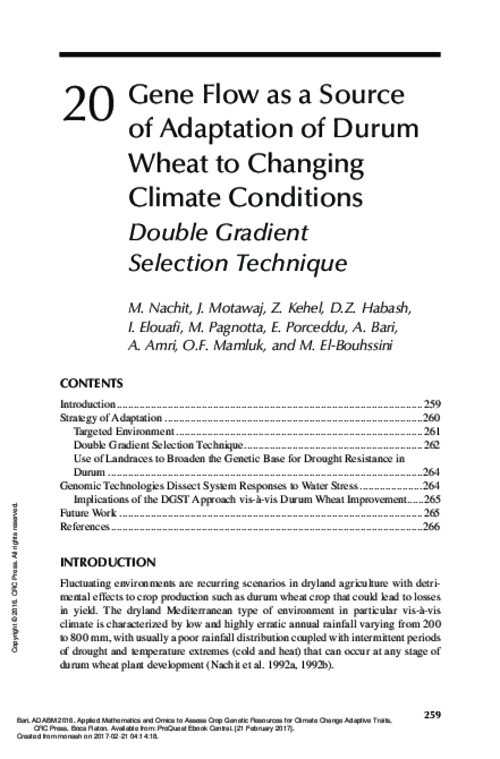 Fluctuating environments are recurring scenarios in dryland agriculture with detri- mental effects to crop production such as durum wheat crop that could lead to losses in yield. The dryland Mediterranean type of environment in particular vis-à-vis climate is characterized by low and highly erratic annual rainfall varying from 200 to 800 mm, with usually a poor rainfall distribution coupled with intermittent periods of drought and temperature extremes (cold and heat) that can occur at any stage of durum wheat plant development (Nachit et al. 1992a, 1992b). These environmental fluctuations and stresses are expected to amplify as climate models show relatively consistent predictions that the Mediterranean basin will become hotter and drier over the next century with annual precipitation likely to decrease by 4%–27% and 3–5°C increase in temperature (IPCC 2007, Habash et al. 2009). The assessment of the fifth report remains in agreement with the later projections including the probable increase in extreme weather events. Because of limitation of irrigation on a large scale for durum wheat commercial production, the only applicable alternative is the improvement of drought tolerance and yield stability through genetics and plant breeding supported by an understanding of the environment fluctuations, stress physiology and the use of molecular markers. This chapter gives a broad review of the durum wheat research program, with emphasis on the challenges involved, particularly drought research to cope with water limitations and environmental fluctuations. Overall, the chapter focuses on strategies to breed for fluctuating environment in the context climate changing conditions.