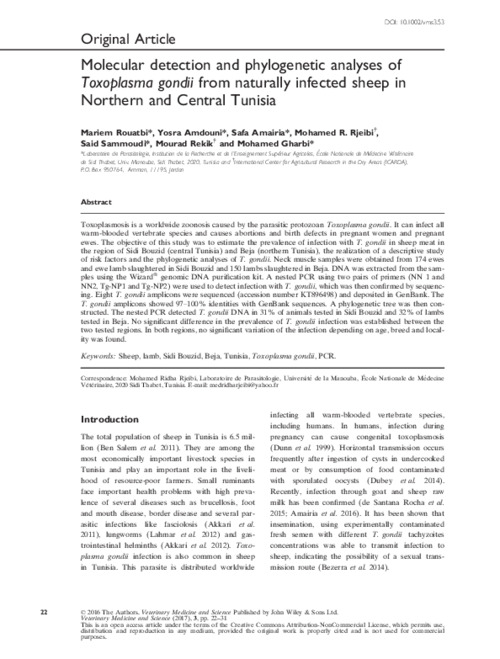 Toxoplasmosis is a worldwide zoonosis caused by the parasitic protozoan Toxoplasma gondii. It can infect all warm-blooded vertebrate species and causes abortions and birth defects in pregnant women and pregnant ewes. The objective of this study was to estimate the prevalence of infection with T. gondii in sheep meat in the region of Sidi Bouzid (central Tunisia) and Beja (northern Tunisia), the realization of a descriptive study of risk factors and the phylogenetic analyses of T. gondii. Neck muscle samples were obtained from 174 ewes and ewe lamb slaughtered in Sidi Bouzid and 150 lambs slaughtered in Beja. DNA was extracted from the samples using the Wizard" genomic DNA purification kit. A nested PCR using two pairs of primers (NN 1 and NN2, Tg-NP1 and Tg-NP2) were used to detect infection with T. gondii, which was then confirmed by sequencing. Eight T. gondii amplicons were sequenced (accession number KT896498) and deposited in GenBank. The T. gondii amplicons showed 97–100% identities with GenBank sequences. A phylogenetic tree was then constructed. The nested PCR detected T. gondii DNA in 31% of animals tested in Sidi Bouzid and 32% of lambs tested in Beja. No significant difference in the prevalence of T. gondii infection was established between the two tested regions. In both regions, no significant variation of the infection depending on age, breed and locality was found.