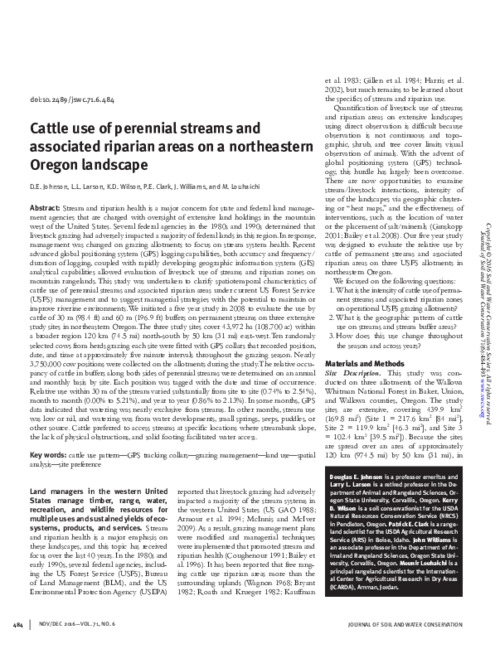 Stream and riparian health is a major concern for state and federal land management agencies that are charged with oversight of extensive land holdings in the mountain west of the United States. Several federal agencies in the 1980s and 1990s determined that livestock grazing had adversely impacted a majority of federal lands in this region. In response, management was changed on grazing allotments to focus on stream system health. Recent advanced global positioning system (GPS) logging capabilities, both accuracy and frequency/ duration of logging, coupled with rapidly developing geographic information system (GIS) analytical capabilities allowed evaluation of livestock use of streams and riparian zones on mountain rangelands.This study was undertaken to clarify spatiotemporal characteristics of cattle use of perennial streams and associated riparian areas under current US Forest Service (USFS) management and to suggest managerial strategies with the potential to maintain or improve riverine environments. We initiated a five year study in 2008 to evaluate the use by cattle of 30 m (98.4 ft) and 60 m (196.9 ft) buffers on permanent streams on three extensive study sites in northeastern Oregon.The three study sites cover 43,972 ha (108,700 ac) within a broader region 120 km (74.5 mi) north-south by 50 km (31 mi) east-west.Ten randomly selected cows from herds grazing each site were fitted with GPS collars that recorded position, date, and time at approximately five minute intervals throughout the grazing season. Nearly 3,750,000 cow positions were collected on the allotments during the study.The relative occupancy of cattle in buffers along both sides of perennial streams were determined on an annual and monthly basis by site. Each position was tagged with the date and time of occurrence. Relative use within 30 m of the stream varied substantially from site to site (0.74% to 2.54%), month to month (0.00% to 5.21%), and year to year (0.86% to 2.13%). In some months, GPS data indicated that watering was nearly exclusive from streams. In other months, stream use was low or nil, and watering was from water developments, small springs, seeps, puddles, or other source. Cattle preferred to access streams at specific locations where streambank slope, the lack of physical obstructions, and solid footing facilitated water access.