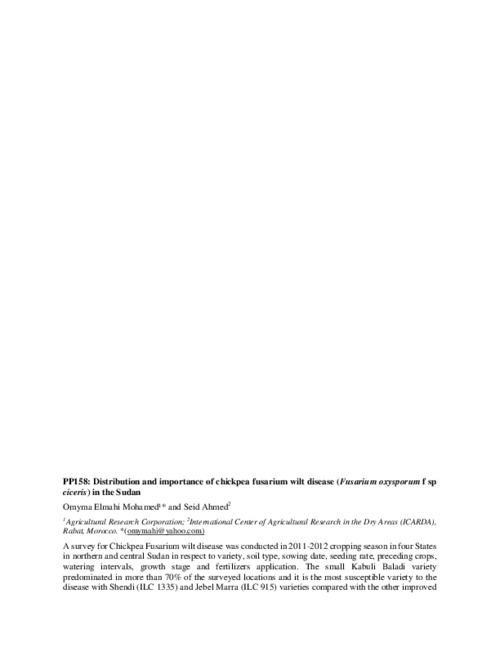 A survey for Chickpea Fusarium wilt disease was conducted in 2011-2012 cropping season in four States in northern and central Sudan in respect to variety, soil type, sowing date, seeding rate, preceding crops, watering intervals, growth stage and fertilizers application. The small Kabuli Baladi variety predominated in more than 70% of the surveyed locations and it is the most susceptible variety to the disease with Shendi (ILC 1335) and Jebel Marra (ILC 915) varieties compared with the other improved varieties. The heavy clay soils of Gezira State supported the highest disease percentage whereas the light clay and sandy clay soils of Gezira north and River Nile States supported the lowest average percentage. Mid November sowing predominated between farmers and about 60% of them grow their crops between the first and mid of November but the early sowings during this period were highly subjected to wilting incidence. The late sowings of the crop on early and late December although they escape the high temperatures of early winter and hence the disease, they affect the crop yield potentials. The seeding rate varied from farmer to farmer in a range of 15-125 kg seeds/ha and the disease is more severe in the higher population densities of the crop. Cereals predominated other preceding crops to chickpea in the rotation and more than 40% disease incidence was recorded in monocropping system. For watering intervals 45% of the farmers irrigated their crops in two weeks interval while the others irrigated in 2 to 3 weeks interval. The longer intervals subjected the crop to higher disease incidence than shorter intervals. Around 54% of the farmers did not apply any kind of fertilizers to chickpea and 45% apply starter dose of Urea and foliar fertilizers. Adding fertilizers to chickpea was not significant in reducing disease incidence. The correlations between these cultural practices and wilt per cent, indicated that only the preceding crop and sowing date significantly affected the disease incidence.