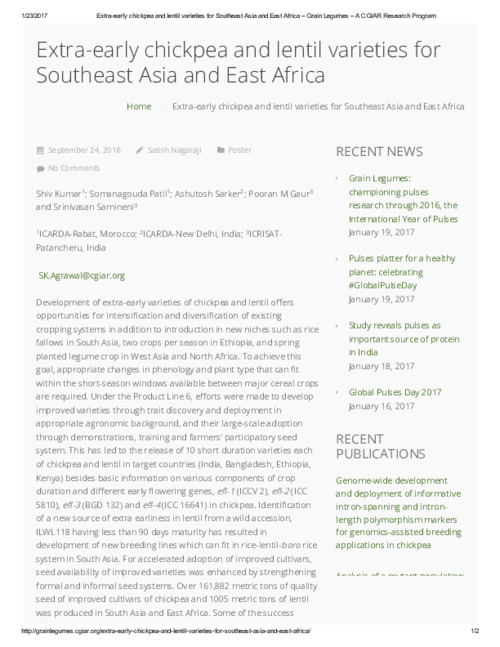 Development of extra-early varieties of chickpea and lentil offers opportunities for intensification and diversification of existing cropping systems in addition to introduction in new niches such as rice fallows in South Asia, two crops per season in Ethiopia, and spring planted legume crop in West Asia and North Africa. To achieve this goal, appropriate changes in phenology and plant type that can fit within the short-season windows available between major cereal crops are required. Under the Product Line 6, efforts were made to develop improved varieties through trait discovery and deployment in appropriate agronomic background, and their large-scale adoption through demonstrations, training and farmers’ participatory seed system. This has led to the release of 10 short duration varieties each of chickpea and lentil in target countries (India, Bangladesh, Ethiopia, Kenya) besides basic information on various components of crop duration and different early flowering genes, efl-1 (ICCV 2), efl-2 (ICC 5810), efl-3 (BGD 132) and efl-4 (ICC 16641) in chickpea. Identification of a new source of extra earliness in lentil from a wild accession, ILWL118 having less than 90 days maturity has resulted in development of new breeding lines which can fit in rice-lentil-boro rice system in South Asia. For accelerated adoption of improved cultivars, seed availability of improved varieties was enhanced by strengthening formal and informal seed systems. Over 161,882 metric tons of quality seed of improved cultivars of chickpea and 1005 metric tons of lentil was produced in South Asia and East Africa. Some of the success stories due to adoption of short duration varieties along with improved crop production practices are chickpea in Myanmar (5-fold increase in production 117,000 to 581,000 tons) and lentil in Bangladesh (126,000 to 210,000 tons). For small holder farmers, obtaining a harvest of chickpea and lentils from the same piece of land as a bonus has not only improved their livelihood but also nutrition for their families.