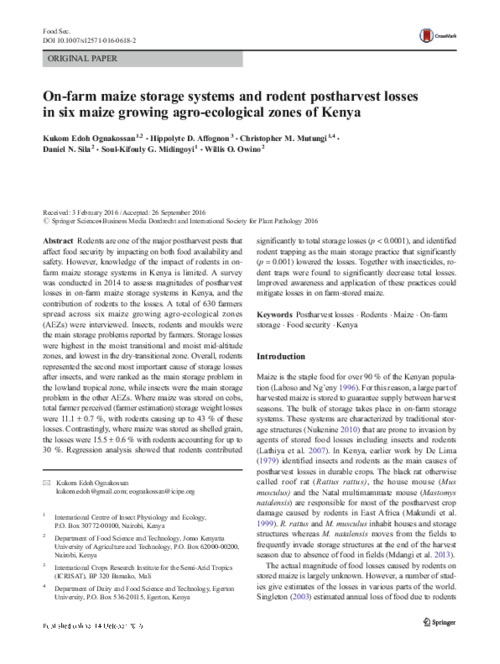 Rodents are one of the major postharvest pests that affect food security by impacting on both food availability and safety. However, knowledge of the impact of rodents in onfarm maize storage systems in Kenya is limited. A survey was conducted in 2014 to assess magnitudes of postharvest losses in on-farm maize storage systems in Kenya, and the contribution of rodents to the losses. A total of 630 farmers spread across six maize growing agro-ecological zones (AEZs) were interviewed. Insects, rodents and moulds were the main storage problems reported by farmers. Storage losses were highest in the moist transitional and moist mid-altitude zones, and lowest in the dry-transitional zone. Overall, rodents represented the second most important cause of storage losses after insects, and were ranked as the main storage problem in the lowland tropical zone, while insects were the main storage problem in the other AEZs. Where maize was stored on cobs, total farmer perceived (farmer estimation) storage weight losses were 11.1 ± 0.7 %, with rodents causing up to 43 % of these losses. Contrastingly, where maize was stored as shelled grain, the losses were 15.5 ± 0.6 % with rodents accounting for up to 30 %. Regression analysis showed that rodents contributed significantly to total storage losses (p < 0.0001), and identified rodent trapping as the main storage practice that significantly (p = 0.001) lowered the losses. Together with insecticides, rodent traps were found to significantly decrease total losses. Improved awareness and application of these practices could mitigate losses in on farm-stored maize