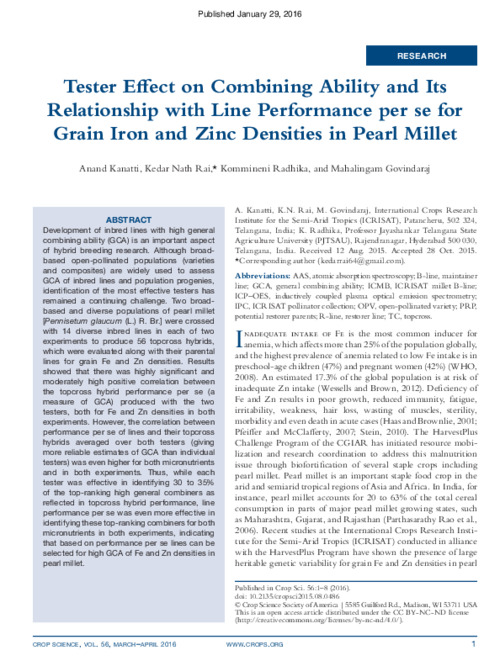 Development of inbred lines with high general combining ability (GCA) is an important aspect of hybrid breeding research. Although broad-based open-pollinated populations (varieties and composites) are widely used to assess GCA of inbred lines and population progenies, identification of the most effective testers has remained a continuing challenge. Two broad-based and diverse populations of pearl millet [Pennisetum glaucum (L.) R. Br.] were crossed with 14 diverse inbred lines in each of two experiments to produce 56 topcross hybrids, which were evaluated along with their parental lines for grain Fe and Zn densities. Results showed that there was highly significant and moderately high positive correlation between the topcross hybrid performance per se (a measure of GCA) produced with the two testers, both for Fe and Zn densities in both experiments. However, the correlation between performance per se of lines and their topcross hybrids averaged over both testers (giving more reliable estimates of GCA than individual testers) was even higher for both micronutrients and in both experiments. Thus, while each tester was effective in identifying 30 to 35% of the top-ranking high general combiners as reflected in topcross hybrid performance, line performance per se was even more effective in identifying these top-ranking combiners for both micronutrients in both experiments, indicating that based on performance per se lines can be selected for high GCA of Fe and Zn densities in pearl millet. © Crop Science Society of America | 5585 Guilford Rd., Madison, WI 53711 USA All rights reserved.