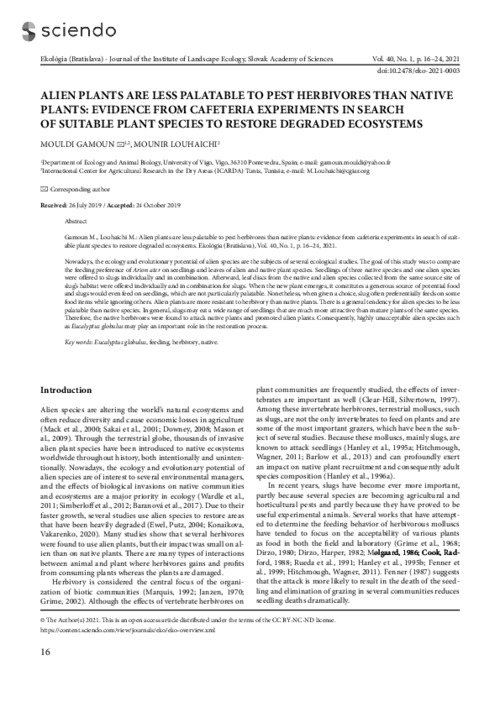 Nowadays, the ecology and evolutionary potential of alien species are the subjects of several ecological studies. The goal of this study was to compare the feeding preference of Arion ater on seedlings and leaves of alien and native plant species. Seedlings of three native species and one alien species were offered to slugs individually and in combination. Afterward, leaf discs from the native and alien species collected from the same source site of slug’s habitat were offered individually and in combination for slugs. When the new plant emerges, it constitutes a generous source of potential food and slugs would even feed on seedlings, which are not particularly palatable. Nonetheless, when given a choice, slug often preferentially feeds on some food items while ignoring others. Alien plants are more resistant to herbivory than native plants. There is a general tendency for alien species to be less palatable than native species. In general, slugs may eat a wide range of seedlings that are much more attractive than mature plants of the same species. Therefore, the native herbivores were found to attack native plants and promoted alien plants. Consequently, highly unacceptable alien species such as Eucalyptus globulus may play an important role in the restoration process.