Institutional and farm-level challenges limiting the diffusion of new varieties from public and CGIAR centers: The case of wheat in Morocco 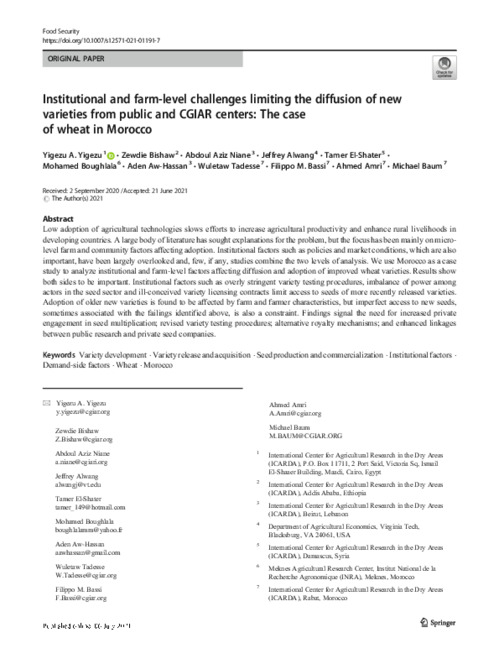 Low adoption of agricultural technologies slows efforts to increase agricultural productivity and enhance rural livelihoods in developing countries. A large body of literature has sought explanations for the problem, but the focus has been mainly on micro level farm and community factors affecting adoption. Institutional factors such as policies and market conditions, which are also important, have been largely overlooked and, few, if any, studies combine the two levels of analysis. We use Morocco as a case study to analyze institutional and farm-level factors affecting diffusion and adoption of improved wheat varieties. Results show both sides to be important. Institutional factors such as overly stringent variety testing procedures, imbalance of power among actors in the seed sector and ill-conceived variety licensing contracts limit access to seeds of more recently released varieties. Adoption of older new varieties is found to be affected by farm and farmer characteristics, but imperfect access to new seeds, sometimes associated with the failings identified above, is also a constraint. Findings signal the need for increased private engagement in seed multiplication; revised variety testing procedures; alternative royalty mechanisms; and enhanced linkages between public research and private seed companies.