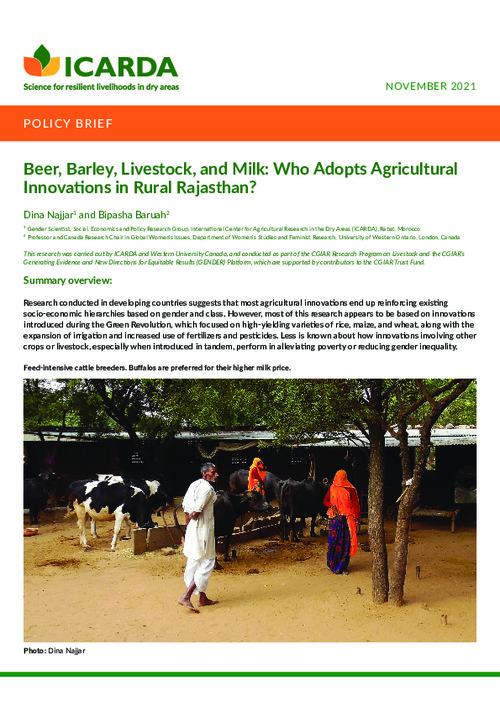 Research conducted in developing countries suggests that most agricultural innovations end up reinforcing existing socio-economic hierarchies based on gender and class. However, most of this research appears to be based on innovations introduced during the Green Revolution, which focused on high-yielding varieties of rice, maize, and wheat, along with the expansion of irrigation and increased use of fertilizers and pesticides. Less is known about how innovations involving other crops or livestock, especially when introduced in tandem, perform in alleviating poverty or reducing gender inequality. With this knowledge gap in mind, we conducted a study in three agricultural communities in rural Rajasthan, India to gain a more nuanced understanding of how the adoption of agricultural innovations for barley cultivation and livestock rearing is influenced by the gender, age, and class background of farmers, and whether such innovations can alleviate poverty and promote gender equality in rural settings. We used data from focus groups with women and men from different class backgrounds and generations who may or may not have adopted the innovations as well as in-depth interviews with male and female farmers who had adopted the innovations. We found that the capacity to adopt barley and livestock innovations was influenced quite strongly by gender, age, and socioeconomic background. To improve the ability of different groups of farmers to adopt agricultural innovations and benefit from them, researchers should pay more attention to these markers of identity. Our findings also complicate several assumptions: that the adoption of agricultural innovations always results in a zero sum-game of men benefiting at the expense of women, or wealthier farmers benefiting at the expense of poorer farmers; that the neat distinction that exists in the literature between “food crops” and “cash crops” holds true on the ground; and that growing cash crops compromises the food security of poor rural communities. In fact, based on our study of interactions between new barley varieties and new breeds of goats, cows, and buffalo in rural Rajasthan, we found that the two can be mutually inclusive. In other words, food security and cash cropping can be accomplished simultaneously under certain circumstances in rural communities.