Project on Enhancing Food Security in the Arab Countries (EFSAC) : Overview of returns to investment 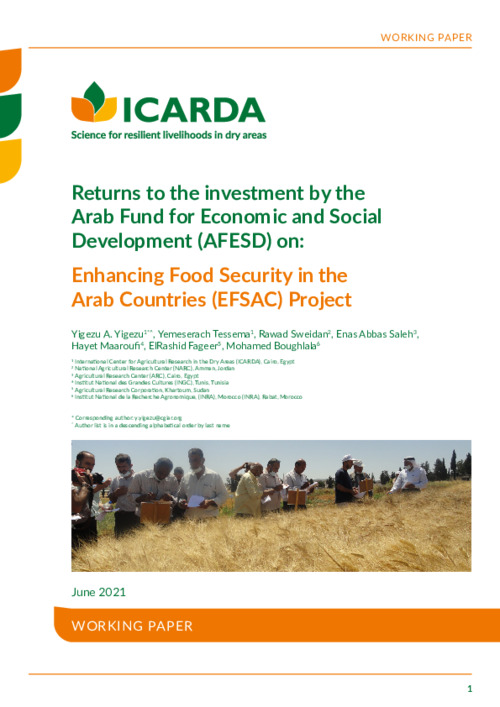 The Arab countries of West Asia and North Africa (WANA) region are the center of origin, diversity and domestication of wheat. Some of these countries were the world wheat basket for millennia. Nowadays Arab countries import at least 50 percent of the food calories they consume at a cost of over US$12 billion (FAOSTAT, 2019), making them the most import-dependent countries in the developing world. According to the 2019 UN World population prospects, the total population of WANA countries is about 464.1 million (6% of the world population) and is projected to reach nearly 655 million by 2050 and to more than one billion in 2100 (DESAPD, 2019). The region’s population grew at the fastest rate in the world with an average rate of 1.91% annually from 2010 to 2019, compared to the world average of 1.16% per year (WB, 2020). The region is also considered the most water-stressed in the world, where two-thirds of countries continue to use groundwater at rates exceeding the renewable internal freshwater resources. In the absence of appropriate interventions, all these facts indicate that the region’s dependence on food imports will increase. Given that cereals are the main staple food in WANA, they play a central role in the food security of the region