Phenotypic variability of sheep breeds to fasciolosis in northern Tunisia 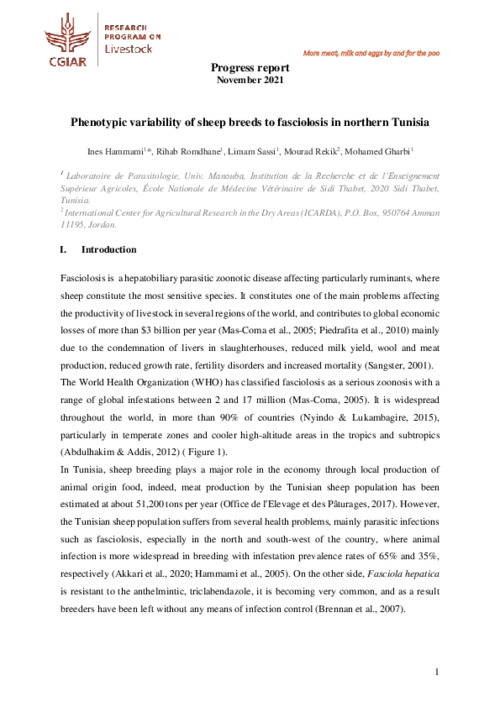 Fasciolosis is a hepatobiliary parasitic zoonotic disease affecting particularly ruminants, where sheep constitute the most sensitive species. It constitutes one of the main problems affecting the productivity of livestock in several regions of the world, and contributes to global economic losses of more than $3 billion per year (Mas-Coma et al., 2005; Piedrafita et al., 2010) mainly due to the condemnation of livers in slaughterhouses, reduced milk yield, wool and meat production, reduced growth rate, fertility disorders and increased mortality (Sangster, 2001). The World Health Organization (WHO) has classified fasciolosis as a serious zoonosis with a range of global infestations between 2 and 17 million (Mas-Coma, 2005). It is widespread throughout the world, in more than 90% of countries (Nyindo & Lukambagire, 2015), particularly in temperate zones and cooler high-altitude areas in the tropics and subtropics (Abdulhakim & Addis, 2012) ( Figure 1). In Tunisia, sheep breeding plays a major role in the economy through local production of animal origin food, indeed, meat production by the Tunisian sheep population has been estimated at about 51,200 tons per year (Office de l'Elevage et des Pâturages, 2017). However, the Tunisian sheep population suffers from several health problems, mainly parasitic infections such as fasciolosis, especially in the north and south-west of the country, where animal infection is more widespread in breeding with infestation prevalence rates of 65% and 35%, respectively (Akkari et al., 2020; Hammami et al., 2005). On the other side, Fasciola hepatica is resistant to the anthelmintic, triclabendazole, it is becoming very common, and as a result breeders have been left without any means of infection control (Brennan et al., 2007). The phenotypic and genetic resistance of local sheep breeds to fasciolosis in Tunisia has never been investigated. Therefore, the aim of the present work is to study the phenotypic variability of local sheep breeds to fasciolosis to identify and characterize resistant animals. Indeed, phenotypic measurements have been collected in the following area.