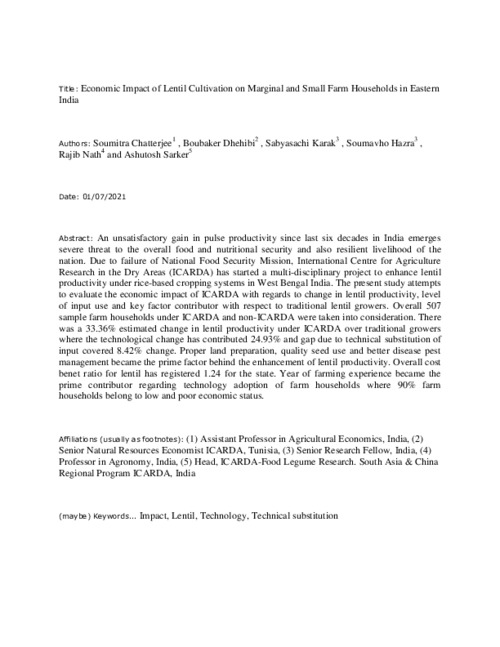 An unsatisfactory gain in pulse productivity since last six decades in India emerges severe threat to the overall food and nutritional security and also resilient livelihood of the nation. Due to failure of National Food Security Mission, International Centre for Agriculture Research in the Dry Areas (ICARDA) has started a multi-disciplinary project to enhance lentil productivity under rice-based cropping systems in West Bengal India. The present study attempts to evaluate the economic impact of ICARDA with regards to change in lentil productivity, level of input use and key factor contributor with respect to traditional lentil growers. Overall 507 sample farm households under ICARDA and non-ICARDA were taken into consideration. There was a 33.36% estimated change in lentil productivity under ICARDA over traditional growers where the technological change has contributed 24.93% and gap due to technical substitution of input covered 8.42% change. Proper land preparation, quality seed use and better disease pest management became the prime factor behind the enhancement of lentil productivity. Overall cost benet ratio for lentil has registered 1.24 for the state. Year of farming experience became the prime contributor regarding technology adoption of farm households where 90% farm households belong to low and poor economic status.