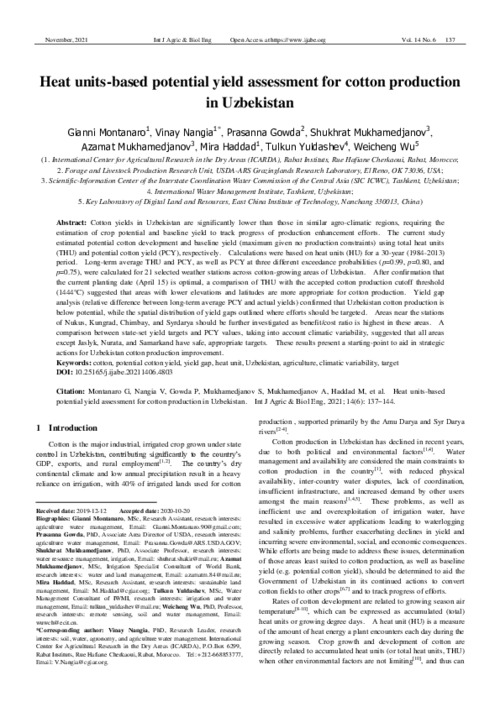 Cotton yields in Uzbekistan are significantly lower than those in similar agro-climatic regions, requiring the estimation of crop potential and baseline yield to track progress of production enhancement efforts. The current study estimated potential cotton development and baseline yield (maximum given no production constraints) using total heat units (THU) and potential cotton yield (PCY), respectively. Calculations were based on heat units (HU) for a 30-year (1984-2013) period. Long-term average THU and PCY, as well as PCY at three different exceedance probabilities (p=0.99, p=0.80, and p=0.75), were calculated for 21 selected weather stations across cotton-growing areas of Uzbekistan. After confirmation that the current planting date (April 15) is optimal, a comparison of THU with the accepted cotton production cutoff threshold (1444°C) suggested that areas with lower elevations and latitudes are more appropriate for cotton production. Yield gap analysis (relative difference between long-term average PCY and actual yields) confirmed that Uzbekistan cotton production is below potential, while the spatial distribution of yield gaps outlined where efforts should be targeted. Areas near the stations of Nukus, Kungrad, Chimbay, and Syrdarya should be further investigated as benefit/cost ratio is highest in these areas. A comparison between state-set yield targets and PCY values, taking into account climatic variability, suggested that all areas except Jaslyk, Nurata, and Samarkand have safe, appropriate targets. These results present a starting-point to aid in strategic actions for Uzbekistan cotton production improvement.