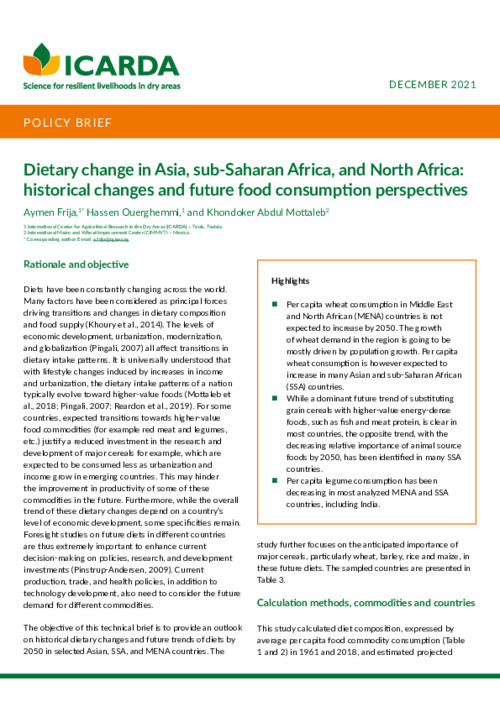 The objective of this brief is to provide an outlook on historical dietary changes and future trends of diets by 2050 in selected Asian, SSA, and MENA countries. The study further focuses on the anticipated importance of livestock products (red and poultry meat), major cereals, particularly wheat, barley, rice and maize, in these future diets. We considered a wide range of both animal and crop commodities and calculated the level of their integration in the average daily diet of a person in different countries. Projections were conducted based on times series data (from 1961 to 2018) and using different time series regression methods which were applied depending on the data quality for a given commodity and country, to generate future consumption values up to 2050. Results confirmed the future trend of substituting grain cereals with higher-value energy-dense foods, such as fish and meat protein, is clear in most countries. However, an opposite trend, with the decreasing relative importance of animal source foods by 2050, has been identified in some SSA countries. Per capita legume consumption has been decreasing in most analyzed MENA and SSA countries, including India.