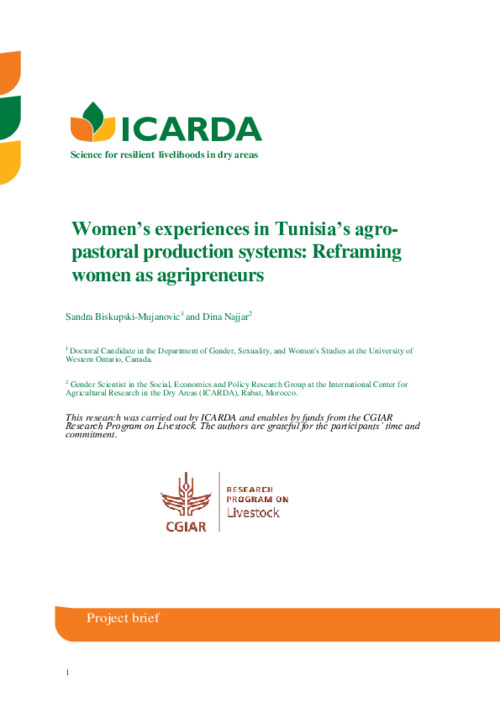 Tunisia if often portrayed as a pioneer of human rights in the MENA region (Bajec, 2020). In September 2021, the President appointed Najla Bouden Romdhane as the new Prime Minister, the first woman to hold this position. This appointment has been touted as a symbol of women’s progress and empowerment in the region (Holleis et al., 2021). Although Tunisia has done well in regards to women’s educational attainment, professional activity and political participation (women account for 31% of parliamentary seats), women continue to suffer from relatively low labor force participation, social inequalities and violence (Moghadam, 2018). Slightly over 12 percent of Tunisia’s female labor force works in the agriculture, forestry and fishery sectors (ibid). Agriculture and agribusiness more broadly, account for 10.4% of Tunisia’s GDP (ILO, 2020). However, many women drop out of the labor force when they marry or have children (Moghadam, 2018). Further, 32% of Tunisian women live in rural areas and 65% of them drop out of school at an early age, contributing to an illiteracy rate of over 30% for rural women (Bajec, 2020). Women make up 70% of the Tunisian agricultural workforce but are paid around 50% less than men and lack social protection (ibid). Livestock is an important, and often primary, livelihood strategy and activity, especially in areas that are dry. Likewise, livestock is also an important and reliable food source (Najjar and Baruah, 2021, 143). Livestock production also represents four percent of the country’s GDP and contributes to 41% of total agricultural production (Dhraief et al., 2019). Livestock is mainly held by smallholders with nearly 80% of rural populations and farmers relying on tradition methods of production, which result in lower productivity (Dhraief et al., 2019). Rangelands are an important resource in Tunisia and generate triple the amount of goods and services than the country’s forests, representing 1.5% of national GDP in 2015 (Werner et al., 2018). Rangelands occupy about 5.5 million hectares in Tunisia, 87% off which are in the arid and desert areas and contribute to 10- 25% of livestock needs compared to 65% in 1960 (Nefzaoui in Elhidri, 2018). The Arab world is projected to have a 10-30% decrease in precipitation in the coming years, leading to a decline in groundwater replenishment and seriously overexploited aquifers as well as increased temperatures (Najjar and Baruah, 2021, 148). The MENA region is among the driest in the world and it was documented that both men and women involved in agriculture reported the following changes in the climate: hotter summers, increased drought incidence, erratic rainfall and reduced rainfall (Ibid, 149). As such, climate change is causing further challenges to agro-pastoral work in Tunisia.