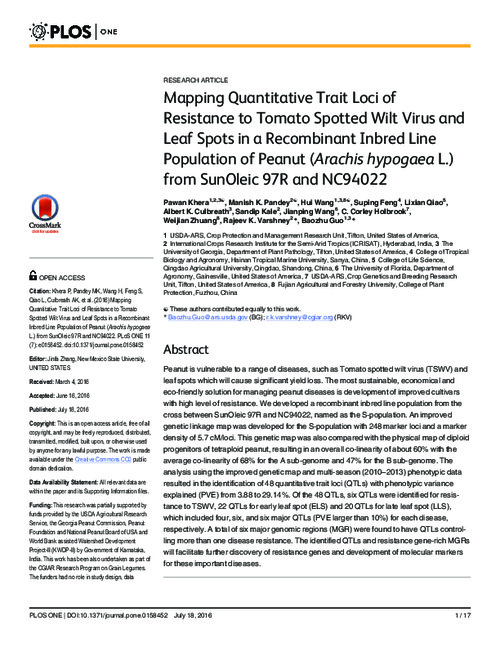 Peanut is vulnerable to a range of diseases, such as Tomato spotted wilt virus (TSWV) and leaf spots which will cause significant yield loss. The most sustainable, economical and eco-friendly solution for managing peanut diseases is development of improved cultivars with high level of resistance. We developed a recombinant inbred line population from the cross between SunOleic 97R and NC94022, named as the S-population. An improved genetic linkage map was developed for the S-population with 248 marker loci and a marker density of 5.7 cM/loci. This genetic map was also compared with the physical map of diploid progenitors of tetraploid peanut, resulting in an overall co-linearity of about 60% with the average co-linearity of 68% for the A sub-genome and 47% for the B sub-genome. The analysis using the improved genetic map and multi-season (2010–2013) phenotypic data resulted in the identification of 48 quantitative trait loci (QTLs) with phenotypic variance explained (PVE) from 3.88 to 29.14%. Of the 48 QTLs, six QTLs were identified for resistance to TSWV, 22 QTLs for early leaf spot (ELS) and 20 QTLs for late leaf spot (LLS), which included four, six, and six major QTLs (PVE larger than 10%) for each disease, respectively. A total of six major genomic regions (MGR) were found to have QTLs controlling more than one disease resistance. The identified QTLs and resistance gene-rich MGRs will facilitate further discovery of resistance genes and development of molecular markers for these important diseases.