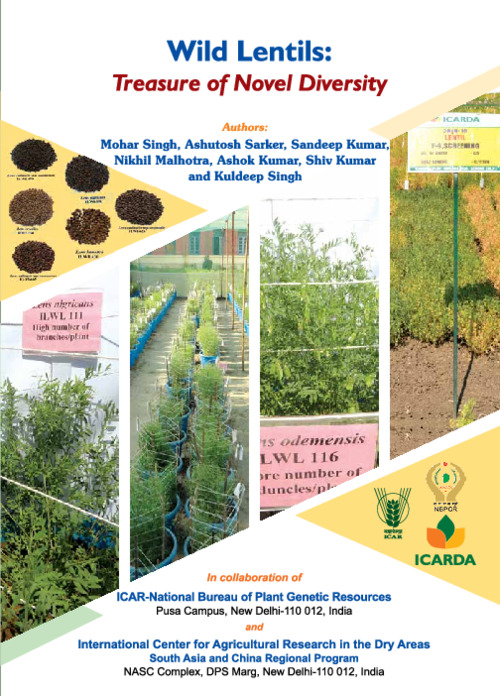 The cultivated lentil (Lens culinaris ssp. culinaris) is an annual herbaceous self pollinating true diploid (2n=2x=14) species with an estimated genome size of 4063 Mbp/C (Arumuganathan and Earle, 1991). The crop is one of the first domesticated species originated from the Near East center of origin (Zohary, 1999), and is most preferred grain legume of the old world (Smartt, 1990). It is an important winter season legume species grown in Mediterranean and semi-arid climates. It is a valuable source of protein (22-25%) and emerged as nutritious substitute for meat. Besides high protein, it also provides minerals (K, P, Fe and Zn), carbohydrates, crude fiber and vitamins (folic acid, pantothenic acid and vitamin B6 ) for human nutrition (Bhatty, 1988; Kumar et al., 2018). The lentil seeds are also rich in lysine and tryptophan amino acids (Erskine et al., 1990). Lentils high nutritional value with a low level of anti-nutritional factors and a shorter cooking time than most of other pulses, make it highly suitable for human consumption (Sahi et al., 2000). The genus Lens belongs to family Fabaceae and a total of seven taxa have been recognized including domesticated species as lentil gene pool. The other wild lentil taxa includes L. culinaris ssp. odemensis Ladizinsky; L. culinaris ssp. orientalis (Boiss) Ponert; L. ervoides (Brign) Granade; L. lamottei Czefr; L. nigricans (Bieb) Godron; and L. tomentosus Ladizinsky. As far as compatibility relationships of wild lentil taxa are concerned, L. culinaris subsp. orientalis is readily crossable with cultivated lentil (Robertson and Erskine, 1997) and considered as immediate progenitor of domesticated species (Barulina, 1930; Mayer and Soltis, 1994). Globally, lentil stands in sixth position in production among important pulses after common bean, pea, chickpea, faba bean and cowpea (FAO, 2018). However, the world lentil production contributed 6% of total dry pulse production during 2010- 2015 with an average productivity of 926 kg/ha. India is the largest lentil producer in the world followed by Canada and Turkey, which collectively contributed to 66% of total world lentil production (FAO STAT, 2018). An average lentil grain yield in Asia is 817 kg/ha, which is far below the world average of 926 kg/ha. Lentil, despite its significant role in human food, animal feed and different cropping systems in the Indian sub-continent, West Asia, Ethiopia, North Africa and parts of Southern Europe, Oceania and North America, has remained under-exploited and researched crop until recently. Further, modern lentil cultivars have some eliteness over traditional ones in terms of their good yielding ability, disease and pests’ resistance, and high nutritional value. If we look into the contribution of top donors for developing high yielding varieties of lentil, a small number of genotypes have contributed significantly to the breeding of majority of improved cultivars through pure line and mass selection following hybridization between lines adapted to specific environmental conditions. Among different accounts across lentil growing regions of India, the pedigree analysis of 35 released lentil cultivars has been traced back to only 22 ancestors and the top ten contributed 30% to the genetic base of released cultivars (Kumar et al., 2003). This narrow gene flow situation could lead to the crop vulnerability to pest and disease epidemics and unpredictable climatic factors limiting progress towards enhancing lentil production. Furthermore, due to lentil cultivation on marginal lands in most of developing countries including India, its narrow genetic diversity makes it more vulnerable to several biotic and abiotic stresses leading to loss of yield and nutritionally contributing traits of interest. Being potential to be used as a staple crop in many regions of world and to meet the nutritious dietary requirements of growing human population through biofortification, it requires the consolidated efforts to enhance the gene pool of existing lentil varieties. Therefore, there is an immediate need to widen the genetic base of domesticated lentil cultivars by introgression of diverse gene sources, which are currently available in distantly related wild Lens taxa. To synthesize the new gene pool and maximize gains from the selection, it is therefore imperative to accumulate favorable genes and alleles from unadapted germplasm into the backgrounds of cultivated germplasm.