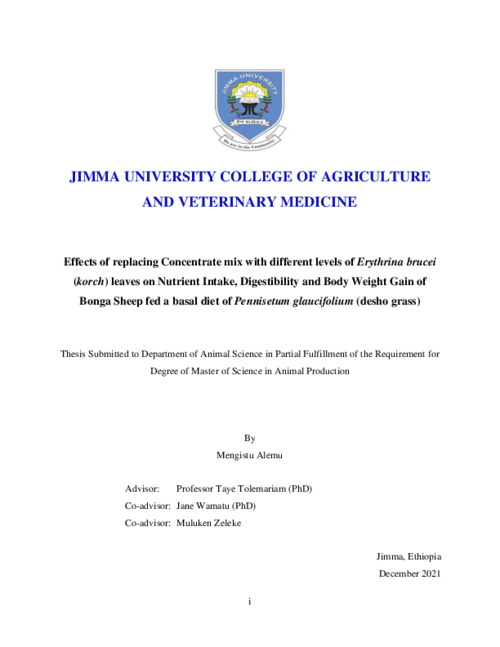 Shortage of feed-in quantity and quality are the major setback for livestock production and productivity in Ethiopia since there is a huge livestock population in the country. The unavailability and increment of commercial mix cost have been significantly affecting the cost of livestock production. Attempts have been made to exploit locally available indigenous feed resources as a sustainable solution to enhance livestock productivity among smallholder farmers. Erythrina Brucei (EB) is a perennial woody leguminous tree with great forage potential to supply adequate amounts of nutrients to ruminants especially in the dry season when there is chronic feed shortage. The feeding trial was carried out to determine the optimum level of EB leaves for replacing concentrate mix (CM) and its effect on feed intake, digestibility, and weight gain performance of Bonga sheep fed Glocifolium pedicellatum (GP) hay as a basal diet. Forty-two (42) intact male local lambs with an initial weight of 20.08+1.06 kg were divided into six groups of seven animals in a randomized complete block design (RCBD). Treatments comprising of T1=ad libitum GP, T2= ad libitum GP + 100% EB, T3=ad libitum GP + 75%EB+ 25% CM, T4= ad libitum GP+50%EB+50%CM, T5=ad libitum GP+25% EB+75% CM and T6=ad libitum GP+0% EB+ 100% CM were randomly assigned to each lamb within the group. The data were analyzed using the general linear model (GLM) procedure of SAS (version 9.3, 2002). The nutrient composition of EB leaves is a potential source of dry matter DM (93.6%) and crude protein CP (28.3%). The supplementation of 50% of EB leaves significantly (p<0.001) increased DM, OM, CP and ME intakes among treatments. Supplemented sheep consumed more (P<0.05) by the proportion of the supplements total DM and organic matter (OM) than the non-supplemented group, but the intake was not influenced (P>0.05) by the proportion of the supplements. The highest (P<0.05) crude Desho was the non-supplemented group. There is a significant difference (P<0.001) in terms of average daily gain (ADG) except T1 which fed GP ad libitum in which the lowest performance was observed.